Special education in Kentucky – Who pays?

There was a big surprise in today’s meeting of the legislature’s Interim Joint Committee on Education at Midway College.

At today’s meeting the Kentucky Office of Education Accountability (OEA) reported that Kentuckians pay the lion’s share of the state’s special education costs with their state and local taxes – about 74 percent of the total costs, in fact. The graph below tells the tale. 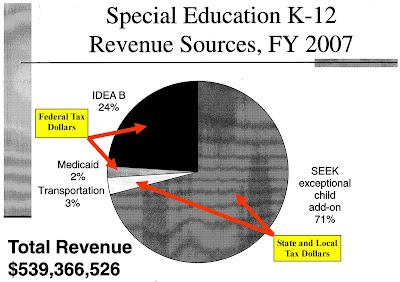 [Graph source: “Review of Kentucky Special Education,” a handout from the Kentucky Office of Education Accountability, July 13, 2009. I added the color annotations after discussing the federal versus state/local dollar sources with the lead OEA briefer, Deborah Nelson.]

Given the total special education price tag of $539,366,526, we are talking about some serious money here. Based on the percentages in the figure, Kentucky residents put up almost $400 million of that in state and local taxes (which does not count the part of our taxes sent to Washington that come back in the federal contribution shown above).

So, if you think we are educating these kids at some out-of-state folks’ expense, forget it. It’s largely your dime.

The OEA briefing provided evidence that our schools may be over-identifying kids needing these special services. That really riveted legislator attention.

If we can cut our special education population by just one percent, the annual savings would be well over $5 million.

Actually, the OEA presented other information in the meeting that indicates we might be over-identifying students at more than a one percent rate. In fact, our current funding formulas might be encouraging schools to over-identify special education students.

More on this later, so stay tuned!