Education Week (subscription?) is reporting that a new study from Thomas Mortenson, who has supplied graduation rate data to the Prichard Committee and the Kentucky Chamber of Commerce, makes some dramatic charges about the failure of our schools to educate boys.

Very simply, the ‘politically correct’ idea that boys and girls have to be educated in the same way to preserve equal opportunity actually is having opposite – and devastating – effects on the nation’s young men.

The impacts from the politically correct notions of teaching boys and girls in the same ways are startling. Mortenson found:

• In 2010, 62.8 percent of young men who graduated from high school enrolled in college, but the girls enrolled at a much higher rate of 74 percent.

• Boys ages 6 to 14 are more than twice as likely as girls to have a developmental disability and are three times more likely to be labeled as mentally retarded.

Not mentioned in the EdWeek report, but found on line in a Mortenson Power Point presentation about “Economic Change Effects on Men and Implications for the Education of Boys,” is this stunning slide, which also shows something is going terribly wrong for young men in the United States. 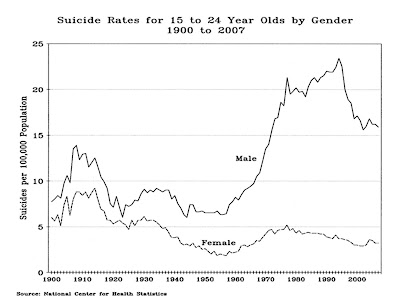 Mortenson argues that teaching styles and discipline policies cause boys to disengage sooner than girls and drop out of school at higher rates.

We found some evidence of that in our report, “How Whites and Blacks Perform in Jefferson County Schools.”

Table 2 in that report shows that across Jefferson County in 2006-07:

• Black females had more than an 8 point graduation rate advantage over black males.

• In fact, black females had a high school graduation rate that was scarcely more than one point below the white male rate.

I know our better teachers are starting to come to grips with this problem, reaching out to boys with educational approaches that appeal to them. It’s way past time for all of our teachers (75 percent of whom are women, according to another slide from Mortenson) to move beyond the politically correct nonsense of past decades to insure that every child gets the education needed to succeed in this new century.

And, that most definitely includes boys.