More on the Increase in Diploma Awards in Kentucky 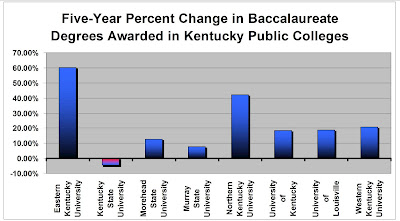 We mentioned earlier that most Kentucky schools showed an increase in degree awards, with the one notable exception of Kentucky State University.

I hope someone is looking into that, especially since I know Northern has always struggled for allocations from the down-state-centric interests in Frankfort. Northern seems to be doing it better, and maybe cheaper, but I have to look into that more to be sure.