Kentucky’s Educators May Get to Do Some Explaining

According to the New York Times, US Secretary of Education Arne Duncan is going to require states to supply more education data to the federal government if they want to wallow at the trough of the second round of education stimulus package money later this year.

The Times says this “…is likely to reveal that in many states, tests have been dumbed down so that students score far higher than on tests administered by the federal Department of Education.”

That is certainly what the data shows in Kentucky. The graph below shows the reported proficiency rates for Kentucky’s public middle school students on reading in CATS and in the federal National Assessment of Educational Progress (NAEP) between 2002 and 2007. 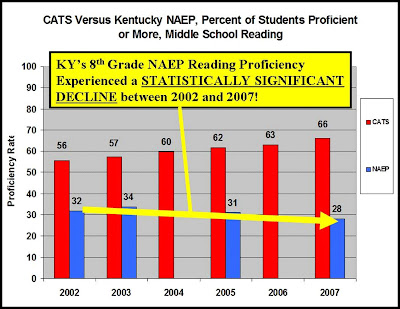 So, even though we just threw our inflated CATS assessments out, if Secretary Duncan wants to see some proof that we’ve really changed our inflated scoring ways, Kentucky’s educators may get to do some explaining.