If you read the Louisville Courier Journal’s piece about the selling of former Education Commissioner Jon Draud’s car on Ebay, you might be under the mistaken impression that he gave the state $40,000 in exchange for us eating a $6500 loss on the sale. 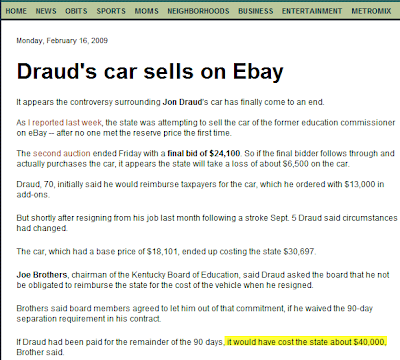 If you believe that, though, you didn’t read about Draud getting $40,000 under the table from the legislature last year.

Draud should at least pick up the $6500 loss like he said he would. This boondoggle is just a tiny example of what happens to taxpayers when such a huge part of state government has such little accountability.