The Kentucky Educational Professional Standards Board has now opened a full investigation into the activities of the professional educators involved.

ACT reported in November that cheating was definitely confirmed in both high schools.

By the way, new PLAN scores that were recently released add more evidence of misconduct.

The table below (click on it to enlarge), extracted from an Excel spreadsheet with the new test results for all schools in the state, shows both of Perry County’s high schools experienced very large score increases on the PLAN test between 2008-09 and 2009-10, the year when the cheating allegedly occurred. PLAN is another state-required test from the ACT, Incorporated given to all 10th grade students that is very similar to the ACT. 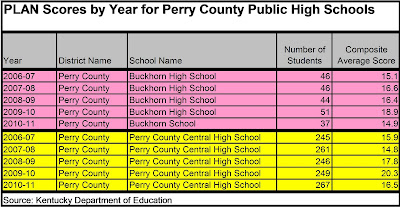 What we don’t want to do is send a message to educators around Kentucky that if you get caught altering test sheets, others will cover for you. If that bad message does get sent, Kentucky’s new assessment system’s credibility is dead before the first test booklet ever gets printed. I think the EPSB agrees.