With the announcement of the departure of Stu Silberman from the Fayette County superintendent’s position, I was asked to take a look at the school district’s ACT performance.

This shows what I found, which quite frankly was an unpleasant surprise. 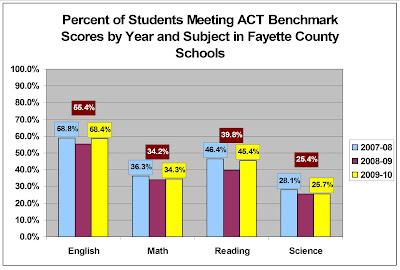 Between 2008 and 2010, Fayette County juniors testing on the ACT posted the results shown, and in every subject, that performance got worse.

The least damage was in English, where the percentage of students making the cut only dropped by 0.4 point. But, the drop was a full point for reading, and it was two points or more for the critical subjects of math and science.

Sort of makes you wonder, doesn’t it?