Enough of the salesmen! We need public servants! 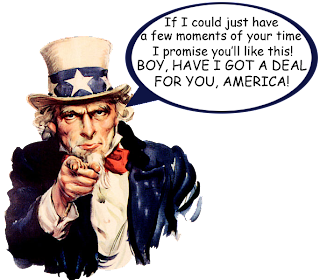 I was listening to local talk radio the other day and I heard something mentioned that struck me as odd.

There was a guest on the show who is running for public office to represent the people of Kentucky. The topic of conversation was the healthcare summit between Republicans, Democrats, and President Obama taking place that day. The host of the show asked his guest if he thought the Republicans were wise to attend the summit to which the reply was of course.

What was the guest’s reasoning? It was an opportunity for the Republicans to sell their ideas on healthcare reform to the American public.

Normally I’m not too animated when listening to this kind of stuff, but…I started yelling in my car.

Why? What’s wrong with that, you ask?

Here’s the problem. I’m sure that a lot of folks think the healthcare summit really was a great opportunity for the Republicans to sell their ideas to America BUT our representatives shouldn’t be selling the American public on anything! We don’t elect representatives to sell policies to us rather we elect them to represent us!

We need a mindset shift away from our elected representatives being some holy, untouchable group of salesmen that tells the public what is good for them back to representing the will of the people.  Remember, they are public servants! Servants!  They serve the public!