Drill, or be killed 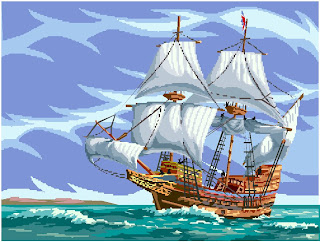 I just spent a snowy afternoon watching the excellent movie, “Master and Commander: The Far Side of the World.”

In this fictional tale of a British Man O’War in 1805, the captain of an outgunned warship realizes he must drill his gun crews until they can fire two broadsides in the time his much more heavily armed French adversary can fire one if the odds are to be evened.

The alternative to the drill – is being killed.

Flash forward to modern times in the real world. When KERA began, education Progressives told Kentuckians that requiring students to practice skills like mathematical operations and learning phonics were “Drill and Kill” activities that destroyed students’ desire to learn. These educational gurus assured us that if we followed their fanciful dreams about education, all would be wonderful in Kentucky’s public schools.

The problem: those gurus were wrong. Unlike the hero in Master and Commander – who knows what he is about – the “Drill and Kill” crowd was long on unproved theory, but woefully short on reality.

Result for Kentucky’s students, especially in mathematics, have been stark.

In 2009 Kentucky’s ninth grade white students were bested in federal testing by whites in every state shown in green in this map. Only in one state in the entire country, West Virginia, did whites get scores that were statistically significantly lower. Since whites make up about 85 percent of Kentucky’s public school population, it is clear that the vast majority of our students perform behind their peers in other states. 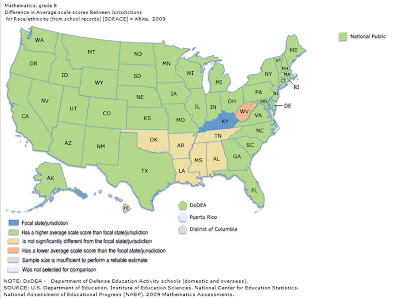 With math now recognized as a key skill for the 21st Century’s economy, it is clear that, thanks to bad advice from education gurus, our kids didn’t drill enough. The resulting deficiencies could kill our kids’ chances for a highly productive working life.

You can read a lot more about the mistakes in KERA in the Bluegrass Institute’s report series, KERA @ 20.