Cutting off your child’s nose to spite his face

Kentucky has been operating on unsound budgets — and filling in the gaps with borrowed money — for several years. Now the tactic seems to have come to a head. The state approaches the midpoint of the fiscal year with revenues that are higher than ever before, but it still isn’t enough.

Gov. Steve Beshear and House Majority leaders have been spinning like crazy in favor of a cigarette tax increase to save the state. The state’s two biggest newspapers have played along as dependably as ever.

It’s a bit of a surprise, though, to see the newspaper of a conservative county like Jessamine getting in on the act. 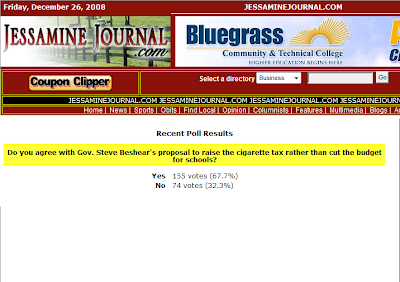 Falling for the idea that propping up Frankfort’s overspending ways and maintaining current funding levels “for the children” with just one little old tax increase merely continues the practice of sacrificing fiscal sanity to political expedience. If voters fall for this, their children will pay for it.