Michigan joins a growing number of states that are finally coming honest about the real graduation rates in their high schools.

According to Ann Arbor News, getting honest resulted in a notable reduction from Michigan’s former, inflated rates. Michigan now reports that only 75 percent actually graduate. Last year, thanks to an inflated system (similar to the one STILL in use in Kentucky), the newspaper says the graduation rate was about 10 points higher.

Michigan’s new, and honest, system also reports nearly a 400 percent increase in the state’s dropout rates. Thanks to their honesty, Michigan now has a much better chance of identifying and rectifying their graduation rate problems.

Meanwhile, Kentucky could switch to a more honest graduation rate system right now with a formula called the “Averaged Freshman Graduation Rate.” This formula has already been scientifically investigated by the US Department of Education and found to be a reasonably accurate interim solution while states get high quality student tracking systems on line. We don’t have to wait at least four more years for our student tracking system to come on line (it still isn’t fully operational) to provide the minimum of four years of data required for an accurate graduation rate calculation.

Why does our state board of education steadfastly refuse to provide us, and our CATS school accountability system, with honest data almost two years after an official state audit found our present numbers are hopelessly inaccurate?

The board knows about this problem – why do they continue to drag their heels on this important step to improve transparency in government?

The U.S. Census Bureau put out its latest income and poverty survey data today. In short order, the Lexington Herald Leader had done its analysis and put out its call for bigger government. 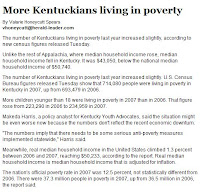 The Kentucky Youth Advocates spin is predictable, but highly suspect. Too bad the reporter didn’t seek another point of view.

In the same amount of time that the number of people in poverty rose 20,000, the population in the state rose 36,000.

So rather than pushing for new “serious anti-poverty measures” in the state, we could just as legitimately urge a change in policy to stop attracting so many poverty-stricken citizens to come here from other states.

In any event, it is a stretch to use the latest survey as an excuse for more government intervention.

Will Lexington soak its homeowners?

Why don’t governments ever view overspending as an issue they can fix by spending less?

From the Lexington Herald Leader:

“Mayor Jim Newberry’s administration has presented the council with three options: Setting the rates at the same level as last year, which would leave the city short $586,190; increasing the rates just enough to balance the budget; or raising the rates by 4 percent, the maximum level allowed by law.”
“Newberry has not said which option he prefers.”

There is another option: get rid of taxpayer-provided city employee cars and Mayor Newberry’s armed bodyguards.

Is it bad news or could it really be good?

The implication is obvious: such an enormous number is a tragedy and another sign that our health system is broken and needs to be taken over by the government.

But, as InsureBlog points out, if there are 47 million uninsured Americans paying $30 billion for care, that is less than $630 a person. Per year.

That’s a statistic that would almost entice people with a choice — and a monthly premium — to join the ranks of the uninsured.

Or, at the very least, it suggests the political effort to grant victim status to those who are “underinsured” is way off base.

Eating their own; anyone else hungry?

Teachers union poobahs are shocked Newark Mayor Corey Booker(D) keeps pushing for school choice and that their efforts to keep him quiet are meeting resistance from Democrats.

In fact, at an event last night in Denver he went on the attack against teachers unions and received applause from the 500 Democrats in attendance.

School choice means giving parents and students the ability to choose how the tax money dedicated to each student is used, whether that means at a school outside of the assigned district or at a private school. Big-government supporters generally hate such market-based competition.

Republicans who are looking for a good issue to run on this year couldn’t find a much better one than this to separate opponents funded by the teachers unions from their base of voter support.

With the current gas price brouhaha underway, more people are gaining a basic understanding of the relationship between supply and demand on one hand and prices on the other.

It’s pretty simple, really. If growing demand outstrips supply, prices go up. More supply than demand forces prices down. Various groups of people, however, have pretty transparent reasons for not wanting to understand this.

Given that government is paying more than ever for health care, however, it seems odd that one organization that would be trying hard not to understand this most basic economic concept would be Kentucky’s Cabinet for Health and Human Services. They have become cheerleaders for economic illiteracy with the odd claim that limiting the quantity of healthcare providers “prevents the proliferation of health care facilities, health services and major medical equipment which increases the cost of quality health care in the commonwealth.”

This ridiculous policy is called Certificate of Need or, more appropriately, CON.

The CON’ers would do well to read this.