Green Party presidential nominee Cynthia McKinney, fresh off claiming the federal government executed 5000 people during Hurricane Katrina and dumped their bodies in a swamp, sounds like Sen. Barack Obama in claiming that the financial meltdown was caused deregulation and free-market ideology. 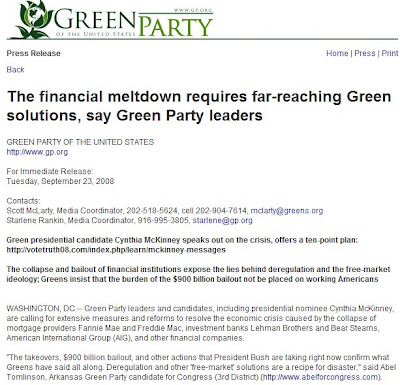 Sounds a lot like Sen. Obama when he said:

“Now they said they wanted to let the market run free. But instead they let it run wild. And in the process, they’ve trampled on our American values of fairness and balance and responsibility to one another.”

Both of them — or either one — should explain in detail where free markets went wrong.

Which state will seize Kentucky Lottery?

While Gov. Steve Beshear is seizing web site domains under the guise of protecting Kentuckians from gambling sites not regulated by the Commonwealth, he might want to consider the possibility of someone else shutting down the Kentucky Lottery for exactly the same reason.

Look at the last sentence in the following screen grab from the Kentucky Lottery’s Ultimate Second Chance game, available on the internet.

The price of transparency

At this morning’s E-Transparency meeting, Assistant Secretary of State Allen Eskridge asked what the total cost of putting public spending records on the internet had been.

Actually, the real cost has been incalculable and has been caused by many, many months of official foot-dragging.

The federal writ of mandamus against the city of Lexington for allegedly awarding welfare benefits to illegal aliens contrary to law got some attention on the radio this morning.

Mayor Jim Newberry told WVLK’s Jack Pattie “I am not for providing services to illegal immigrants unless we are required to by federal law.”

Thank-you for recognizing that federal law trumps your personal preference when it comes to illegal aliens. I look forward to informing Judge Forester that you agree
with me on this issue.

What steps are you taking to insure that you’re not inadvertently giving services to which illegals are not entitled to if you have no eligibility and verification mechanisms in place? We all know document fraud is rampant by the illegal community and I think you want lawbreakers punished as much as the taxpayers do. After all, law enforcement is one of the biggest expenses of the General Fund.

Lexington will realize significant financial resource savings once public benefits are discontinued to ineligible recipients. Reducing the monetary incentives for continued illegal immigration into Lexington will curtail such significant negatives as the illicit drug trade, gang activity (4 of 9 criminal gangs in Lexington are Hispanic), and a persistent drain on the public coffers.

Think of the positive publicity the City will receive when it stands up to the pro-illegal immigration lobbyists.

It would be great if you would unilaterally implement the SAVE program in Lexington in all public benefits and health agencies. If you did so in a verifiable manner, I would withdraw my lawsuit and spare the City and you a lot of heartache. If you do the right thing, so will I. How about it?

Will you support implementation of Title 8 Sec 1621? Will you immediately implement the federal SAVE Program and stop the abusive and illegal consumption of taxpayers dollars?

I look forward to your response. Expending further tax dollars by having contracted your representation to one of the most expensive law firms in Kentucky strikes me as being unreasonable.”

Once again, there doesn’t appear to be coverage anywhere else on this ongoing Kentucky Department of Education effort. I didn’t see any reporters at the meeting.

The session started with a quick welcome from education commissioner Jon Draud, who called in by telephone from home as he is still recuperating from a recent stroke (Jon, all at the Bluegrass Institute wish you a speedy recovery).

The initial report at this meeting concerned the committee’s request for input from educators and the public that was issued after the last meeting. Lisa Gross indicated there were about 200 e-mail responses plus more in faxed returns. Just assembling the e-mails into one Word document required 100 pages.

Unfortunately, when I asked to be included on this mailing, I was informed that the document was only for the committee, and it was up to the committee to release it to the public. That makes it tough for people who sent comments to see if what they wrote is accurately reflected in the edited document the committee is going to receive. This also precludes any public discussion about the comments. It’s hard to understand why this document, created for public discussion by a public committee, would be withheld. Perhaps this decision will be revisited.

The next issue was whether the committee wanted to hear live testimony from people who wanted to address the task force. It was pointed out that the task force has only a limited amount of time left and cannot afford to be bogged down in unsolicited presentations (Also, the public comment request provided an opportunity for individuals to transmit their thoughts to the committee). In the end, it was decided that the committee will continue to manage presentations to cover topics of interest only.

Next came a lengthy discussion about the assessment of arts and humanities in CATS. This continued deliberations from meeting three, which were covered in our notes on that meeting.

The task force appears to be generally positive about a pilot arts and humanities assessment program that has been tried in some elementary schools. However, a request at the last meeting for cost estimates to implement the program statewide at all school levels went unanswered. So, in the end, the committee deferred a vote on a draft recommendation to change the arts and humanities assessment pending that cost analysis, which is now promised for meeting five.

One positive note came in comments from Dave Spence from the Southern Regional Education Board (SREB), who is the facilitator at the task force. He said that SREB received a grant from the Gates Foundation to look at college readiness standards in the P to 12 systems in Kentucky, Texas and Virginia. The research will look at state standards in language arts and math and how the state tests that. It will also address accountability and curriculum changes and the teacher professional development required to make this all work so our kids will be better prepared for college.

The rest of the meeting was completely consumed by two more reports on the controversial writing portfolio program. Both presenters are portfolio proponents. They exhausted the remaining time in the second half of the meeting without allowing any time for questions, which didn’t seem to sit well with many task force members. Sadly, both presenters had good handouts. These could have saved a lot of presentation time had they been sent to the committee members prior to the actual meeting.

Anyway, perhaps as evidence of the committee’s displeasure, an attempt to see if there was any sort of consensus on portfolios was quickly shot down. Instead, the presenters were invited to the next meeting to answer questions.

Thus, after four three-hour-long meetings, task force agreement on writing remains as elusive as ever.

Even worse, some important information concerning portfolios still has not been presented to the committee. The first set of still-to-be-discussed evidence is from the National Assessment of Educational Progress Eighth Grade Writing Assessments. The Bluegrass Institute has written about this subject, and we see Kentucky’s rather poor performance on NAEP writing as evidence that teachers in other states are teaching writing – much more effectively – without portfolios in their state accountability systems. This national assessment material was requested by Steve Stevens, head of the Northern Kentucky Chamber of Commerce, at task force meeting two. As of the close of meeting four, it still has not been presented.

The second set of evidence concerns a writing portfolio audit for the past year. The audit for 2007-2007 was presented at meeting three, and the 2007-2008 audit was promised for this meeting. It was never mentioned.

Thus, at the close of meeting four, only two major issues, portfolios and arts/humanities assessments, have been discussed in any detail. With a host of other items on the agenda still to be considered – including: four separate items on general assessments, standards, longitudinal testing models (a 1998 legal requirement that has never been addressed), changing CATS focus to individual students, college readiness issues, analysis of the EPAS system, balance of school/student accountability, timeliness of results to schools, and end of course exams – it seems clear that this committee is now well behind. With only two meetings scheduled in October, and maybe one or two more, still unscheduled, for November, the committee is at least half way through with little to show for all the time expended to date.