Kentucky Gov. Steve Beshear was elected last year on the promise of what casino gambling revenues could buy for the state. His grand plan died in the legislature, though, when big spenders clashed with “save horse racing with casinos” interests and they could not reconcile their differences.

Plan B for Beshear, it appears, is to clamp down on the scourge of foreign-based internet gambling which he says costs Kentucky tens of millions of dollars a year, competes unfairly with the horse industry, and, presumably, would damage Kentucky’s future casino operations.

His arguments for state seizure of 141 domain names get a hearing Tuesday in Franklin Circuit Court and include some nonsense about protecting children and fighting organized crime. He doesn’t, of course, explain how the same protections will work for his brick-and-mortar casinos. One thing is crystal clear: this is all about revenue enhancement.

Beshear’s problems really begin when jurisdictional issues come up. When that happens, it looks a lot like a successful effort here could set off a string of efforts by governments across the globe to seize domains of web sites they don’t like for one reason or another.

That’s why the Bluegrass Institute and Americans for Tax Reform teamed up with five other interested parties for an emergency summit in Frankfort, Kentucky to draw attention to the First Amendment downside of Beshear’s actions.

This exchange between Bluegrass Institute’s Jim Waters and ATR’s Patrick Gleason gets to the heart of the matter:
(click here for video)

“We have gotten soft in the United States”

Interesting comment in WSJ from a 94 year-old Wall Streeter who has worked there since the Great Depression.

“”We’ve gotten soft in the United States, politically, economically and in every way. We’ve had so much prosperity that we can’t compete any more. Those days are gone, except in small companies. In things like autos — those days are gone,” said Mr. Glickenhaus, once a big Chrysler investor.”

And public policies that have contributed to gaming of the system using the power of big government and redistribution of wealth haven’t helped much, either.

“Where my botox crazy check?”

Funny that in the same week Sen. Joe Biden got unwanted attention for his “good make-up job” on national television, Congress moved decisively to make mental health services too expensive for the poor, vulnerable masses they keep speechifying about.

That’s what they did when they added a mental health parity mandate for health insurance policies to the banking bailout bill. And it just so happens that the proof is in the pudding Sen. Biden emphatically denies having injected into his forehead. Congress has yet to mandate that health insurers cover nip-and-tuck procedures and the lack of government involvement has contributed greatly to the fact that such procedures are scarcely more expensive than they were before Sen. Biden developed all those wrinkles.

It’s the lack of major medical insurance coverage that has kept plastic surgery costs down. Not that that will stop Senators Obama and Biden from complaining next year about free market greed running up the costs of mental healthcare.

By the way, the term “crazy check” is not meant to offend anyone seeking mental health services. In Eastern Kentucky, that’s what they call welfare — another program whose well-intended fans have to play fast-and-loose with reality in order to get their way.

“If you’re a parent in Kentucky, what you care about is whether your kids can read, not how well they can do on the state test,” Mr. Koretz said. “And the national assessment told us that, in fact, the gains in the state test were bogus.”

To illustrate his comments on illusions of progress from state tests, Koretz used for an example the great similarity between the Kentucky Instructional Results Information System (KIRIS) and the National Assessment of Educational Progress (NAEP). Koretz says that due to the similarity between the two tests, the results for fourth grade reading should have moved, “…more or less in lock step.” Instead, while scores rose sharply on the KIRIS, they slid slightly on the NAEP.

Koretz also noted that KIRIS resembled an NCLB prototype test, but he didn’t make it clear that Kentucky’s current CATS assessment actually did grow out of the KIRIS “prototype” and is indeed used for NCLB today.

KIRIS is now a failed history, but, could Koretz’s strong words apply to CATS?

To answer that question, take a look at “CATS in Decline: Federal Yardstick Reveals Kentucky’s Testing Program Continues to Deteriorate.”

In this report you will see evidence that scoring on the CATS, as in the past with KIRIS, has also been getting more and more out of step with the NAEP over time.

This figure, taken from the “CATS in Decline” report, shows how the rigor of scoring for fourth grade reading on Kentucky’s assessments has steadily gotten easier over time during the transition from KIRIS to CATS. On this figure, a score of 100% indicates perfect alignment between Kentucky’s score of “Proficient” and the NAEP score of “Proficient.” In contrast, a score of zero indicates what Kentucky scores as “Proficient” the NAEP only scores as “Basic” performance, meaning a student has only made partial mastery of reading for his grade level.

The latest data for 2007, shown as a red bar, indicates that what Kentucky now grades as “Proficient” reading is actually considerably below what the NAEP considers only a “Basic” performance. 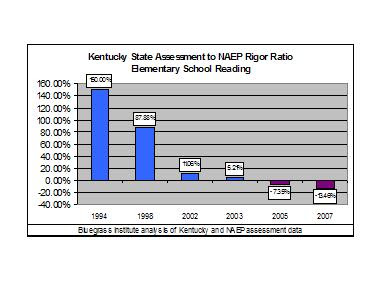 If you want more details, check out the full report. In any event, it appears that Koretz’s strong concerns about the KIRIS “NCLB prototype” remain valid for Kentucky’s current NCLB test, as well.

George Bailey is us — all of us

This is going to sound like a commercial. Given all the manure we’ve been fed about bankrupt banks needing us to borrow money we don’t have and give it to them because they made bad government-backed loans, though, I think we can handle an extra helping of free enterprise.

While the banking crisis seems to be not so much reality as Washington-speak, a little web site called Prosper.com is lining up lenders and borrowers. And you can save by avoiding FDIC insurance and federal entanglements if you don’t mind doing your own homework.

Check out the site and consider doing business with them if you want — I don’t have an account or a stake in you doing so — but please take a look at their blog for a glimpse of what business in America used to be like:

“George Bailey is us…people and Prosper. If you don’t know what I’m talking about you can check it out at Prosper.com. It’s people helping people. Those who have – help make loans. Those who need – borrow. Pretty simple stuff; pretty amazing stuff.”
“Prosper harkens back to a time when helping individuals was part of what a community was all about. The old Savings & Loan concept is alive and well. People looking for loans from $1,000 to $25,000 can go to Prosper and appeal to the George Bailey in all of us as people bid on the amount and interest rate of the loan. Just people helping people…and all without a bank. As our “real life” run on the banks continues, Prosper and its members may be among the last, safe places to get a loan.”
“So, as banks fold and our faith in financial institutions fades, it’s nice to know there’s
still a little bit of Bedford Falls out there. Like their slogan says, “Let’s bank on each other.” And, don’t worry. Like in the movies, things seem to work out in the end.”