CATS Inflation So Obvious a Grade School Kid Should See It

The Kentucky Board of Education looked over the new CATS results early this week, but they shouldn’t have wasted their time. With the new scores release, it is now painfully evident that this testing program is hopelessly inflated.

I took a look at the latest scores and compared them to what would have been predicted if what was “Proficient” on state assessments had stayed constant. The results were disappointing, to say the least.

For elementary schools, the latest School Accountability Index is 14.3 points higher than the original scoring scales from the early to mid-1990s would have predicted.

Things were MUCH worse in middle school CATS, however, where the discrepancy was an incredible 29.6 points. Instead of getting the 86.8 Accountability Index in 2008 that was just reported to the board, the middle schools would have only gotten a 57.2 if Kentucky’s scoring scales had not been inflated over the years.

The inflationary trend in middle school Accountability Index results is unmistakable, as this graph shows. Notice that after the fourth year of KIRIS testing in 1994-95 (the dark blue line), middle school progress under KIRIS almost vanished, but it was “resurrected” when the scoring scales were revised (and grossly inflated) when CATS came in (the light blue line), and it got more “bonus points” in 2006-07 when CATS scoring changed again (the red line). 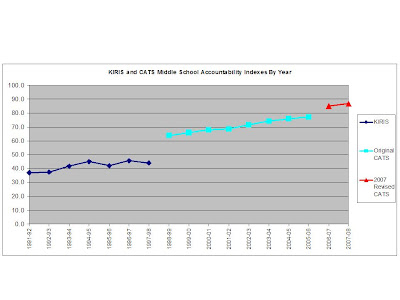 Only the high school scoring has stayed fairly consistent with the original meaning of “Proficiency” as it was defined when KERA got started.

With only small proportions of our eighth graders getting reasonable scores on the ACT’s EXPLORE test, and with the National Assessment of Educational Progress now generally reporting proficiency rates around half those reported in CATS, it is clear that Kentucky isn’t getting an accurate picture of public school performance from its bloated state assessment. Clearly, it is time to move on to something more informative before the Chinese and the Indians academically eat our kids alive.

To see an Excel spreadsheet with the data I examined, click here.

Revenues for the first quarter of the 2009-10 fiscal year were $17,798,488 higher than they were a year ago. Even if you include the $15 million drop in the Road Fund, increased revenues point yet again to the need to get spending under control rather than hitting taxpayers any harder.

Another “eureka!” moment for brain-dead Left

Couldn’t help thinking of the following clip from Star Wars when I saw the latest mortality calculator from the Robert Wood Johnson Foundation. They claim to have found a way to keep people from dying — and to be able to show you on a snazzy internet calculator.
[youtube=http://www.youtube.com/watch?v=R09jFWQVrE0]
The RWJ people — and their hapless followers in the media — have determined after minutes and minutes of deep thought, that simply raising taxes will set their great plans into action. Funny how their mandate for getting more people some education sounds so much like the federal plan to print more dollar bills so everyone will have running around money.

Oh, here is a link to their life-saving calculator. Too bad there is nothing in there about raising educational standards, making assessments more useful, or controlling wasteful spending by the bureaucracy.

For a nice summary from Derek Hunter of the Media Freedom Project on the problems with Kentucky’s ill-advised attempt to seize the Web Domain Names of more than 100 Internet poker sites, check out this video.

House Speaker Nancy Pelosi is out with her latest great idea: another $150 billion “stimulus” check. Good grief. If that worked, wouldn’t we already be out of the woods?

It’s not just about internet poker

“Jim Waters, who is the Director of Policy and Communications for the Bluegrass Institute, commented, “The Governor tried to slip this upon the Kentucky people, but failed when our coalition stood up in Frankfort and openly opposed using the force of government to trample on the rights and liberties of the people.””

Read more about it here.