Kentucky law has mandated since 1982 that the executive branch have no more than 33,000 employees. The good news, Mark Hebert reports, is that we have finally gotten down to that number after many years of ignoring the law. 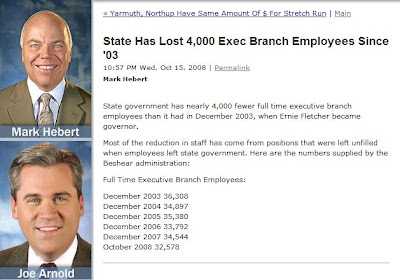 It has been very easy to attack official Frankfort for mostly ignoring the growing $27 billion public employee benefits disaster. As such, it is only fair to give credit where it is due for this step in the right direction.

All eyes on Judge Thomas Wingate

Property rights and free speech activists all over the country are waiting for a ruling from Franklin Circuit Judge Thomas Wingate on Gov. Steve Beshear’s odd attempt to seize internet domains.

A ruling is expected at any time this afternoon. Stay tuned…

State Board of Education To Control Findings

Until yesterday, the information provided to the public consistently indicated that findings from this task force would be collected in a report to be provided to the legislature. Well, forget that.

If the public had known all of this back in April, then we could have created a truly independent study group, which is the way all previous task force efforts to improve our assessment program have operated.

Now, little time remains until the next legislative session, and if yesterday’s task force meeting is any indication, very little, if any, productive work is likely to be accomplished.

But, even if the Assessment and Accountability Task Force does come up with something new, the public and the legislature will only get to see it through the filter of the Kentucky Board of Education.

The Libertarian Party of Kentucky is going to file suit in federal court against the Commonwealth of Kentucky over a Court of Appeals decision issued last week that removed 3rd district Congressional candidate Ed Martin from the ballot, the party’s chairman said.

“Kentucky law doesn’t allow us to appeal a Court of Appeals decision,” said Ken Moellman, LPKY chairman. “So our only choice is to sue in the state on the federal level. It was a terrible decision. It violates the rights of all third parties.”

Martin, a registered Republican, argued in Jefferson Circuit Court in September that he should be allowed on the ballot even though Kentucky election law prohibits members of qualified parties — Republican or Democratic — from running for office as independent candidates in partisan races. He said the Libertarian Party is a bona fide party even though it is not considered a qualified party in Kentucky, and that he is not, therefore, an independent candidate.

The Circuit Court agreed with Martin, before the Court of Appeals overturned.

Obama supporters on the issues

Listen to this clip from the Howard Stern Show in which Barack Obama supporters are stopped on the street and asked if they support all of Obama’s positions on the issues.

It’s G-rated material, so give it a listen by clicking the image below. While the language is clean and there is nothing off-color in this at all, it is shocking.
[youtube=http://www.youtube.com/watch?v=NyvqhdllXgU]

Beshear should fold and walk away

At issue is Beshear’s ongoing effort to introduce the concept of state censorship of the internet and expand on the old one of illegitimate seizure of private property. In the Lexington Herald Leader:

“The concept that domain names of Internet sites operating legally in their home nations can be seized by other nations for violation of local laws is one that should concern all Americans.”

“For example, should CNN’s Internet domain name be at risk if CNN posts an article critical of Cuba that Cuba finds unlawful? Should Focus on the Family’s domain name be eligible for seizure by Saudi Arabia for articles questioning Muhammad’s status as the greatest prophet?”