Think KERA is doing a bang-up job getting kids ready for what comes next in life?

The Kentucky Enquirer just ran a highly disturbing article about the serious lack of preparation – including such things as academic accomplishment, career planning, and motivation – that plagues far too many Kentucky high school students.

The article draws on a new report from the ACT, Incorporated, the people who operate the ACT college entrance test. ACT compared data they collect during testing and job projections from the Bureau of Labor Statistics to determine if enough students are interested and prepared for the anticipated jobs of the future. The nutshell summary – they aren’t.

Even when enough kids are interested in a field, such as health care, their ACT scores indicate woefully inadequate preparation. Only about one out of ten kids in Kentucky has an adequate science background to enter college programs needed for these technically challenging fields.

An alarming two-thirds of Kentucky’s kids score too low to be ready for credit-bearing college math courses.

Sen. Joey Pendleton has pre-filed SB 12 for the 2009 General Assembly. It is a bill that would require oil companies to offer ethanol-blended gasoline, fuel ethanol, AND unblended gasoline. The bill has an exception for stations that are already required to carry reformulated gasoline.

How about an exception for people who don’t like paying extra for their food so they can run their cars on less efficient fuel?

So why did we do this again?

A couple of very interesting quotes from Senate Minority Leader Mitch McConnell on Polwatchers Saturday night about political heat he is getting for supporting the bailout bill:

““It’s not fair to paint this as some kind of fatal vote when you’ve got such a huge bipartisan majority voting for it,” McConnell said in his first detailed discussion with Kentucky reporters of the vote he took 11 days ago.”

Kentucky Second Congressional District candidate Sen. David Boswell was asked recently his position on Sen. Barack Obama’s plan to abolish secret ballot union elections and allow unions to intimidate their way back into domination of not only the political process, but business operations as well.

Watch Boswell as he sides firmly with Obama:
[youtube=http://www.youtube.com/watch?v=j6u2QqJO-jI]

Beshear/Abramson/Yarmuth had a press conference this afternoon to announce that you are spending $68 million extra to the government so they can get credit for paying heating bills for Kentuckians who aren’t you.

Oh, and they also wanted to remind you to vote for them.

So turn your thermostat down this winter so others won’t have to! 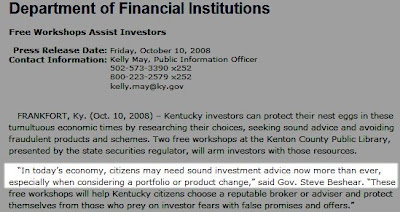 Is Steve Beshear seriously giving investment advice? How about “stop spending money you don’t have?” Governor? How about “stop paying too much for school construction?” Or maybe “get realistic about funding long-term liabilities?”