Like borrowing booze to give a drunk a drink

If you liked the bailout of Wall Street banks, you are going to love what’s next: a bailout of state and local governments.

Public finance newspaper The Bond Buyer reports today that an effort is underway to lobby Congress to spread the wealth around to local governments who have overspent their bank accounts:

“Spending by states and municipalities accounts for 12% of gross domestic product, Kanjorski said, adding that a contraction in the governmental sector will lead to a worsening of the economy.”

They have to be kidding. The only way out of the mess too many state and local governments are in is to create a “contraction in the government sector.” In what alternate universe will borrowed federal money do anything but make it all worse?

Rep. Scott Brinkman sat down for an interview with a Louisville Courier Journal reporter recently in which he praised the wealth redistribution policies of Sen. Barack Obama and the energy policies of President Jimmy Carter.

The answer, Brinkman said, is more taxation and more government spending. Oh, and more borrowing. But I’m sure he meant that to fall under “more taxation.”

Amazing passage, in Brinkman’s words, below. It’s noteworthy, I suppose, that Brinkman is a Republican. 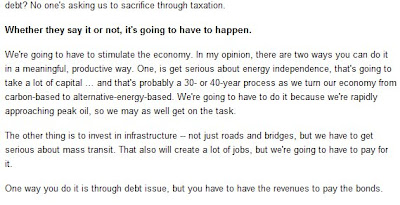 The whole “Lunch with Brinkman” interview is available by clicking here.

Can’t imagine my opinion would have been welcomed at lunch that day. But I sure would like to help Rep. Brinkman expand his list of economic stimulants.

Kentucky teachers unions’ stranglehold on schools has resulted in the commonwealth being one of the very worst places in the nation for those who value the competition of school choice. That may change regardless of who is elected POTUS on November 4:

“Apparently, both candidates realize the value of competition in schools:
Here are Obama’s exact words: “Charter schools, I doubled the number of charter schools in Illinois despite some reservations from teachers unions. I think it’s important to foster competition inside the public schools.””

“Of course, Obama wants to limit choice and competition to public schools (which include charters), while McCain wants to include private schools in the mix. But they agree on the big idea: public schools are improved when they have to compete to earn students and the revenue theose students generate.”

Looking forward to some change there.

Hey Skippy, can you swim?

The actuarial report on Kentucky’s Affordable Prepaid Tuition (KAPT) program will show an additional $35.7 million in red ink when it becomes available sometime in the next few days, sources within state government report.

The program has been a constant money-losing proposition for taxpayers since current Finance and Administration Jonathan “Skippy” Miller promoted the idea of a taxpayer-backed college financing scheme in his 1999 run for Treasurer of Kentucky. The program was created by the 2000 General Assembly.

Further losses were limited somewhat when the program was closed to new recipients in 2005. Obviously, though, lots of red ink remains.

Overpromising to recipients combined with underperforming investments and a guarantee of a taxpayer-financed bailout got us into this mess.

Hmmm… Why does that sound familiar?

Looking forward, a pertinent analogy is present in the case of the state’s public employee defined-benefit retirement plans. There is already $27 billion worth of red ink there.

Anybody want to cut our losses on the big bucks?

Everyone in Judge Thomas Wingate’s office appears to be taking a late lunch in a bizarre twist on Gov. Steve Beshear’s internet domain seizure case.

It is an odd challenge for Judge Wingate, and might even explain a couple of martini’s at the local watering hole on a Thursday afternoon for a staff that was reduced to calling media yesterday and explaining that his ruling couldn’t be released on schedule because of a computer glitch.

I don’t think I’ve ever had so much fun being lied to by a public official.

If Judge Wingate goes against the Governor, I guess he may face some kind of retribution. And if he goes against common sense and the Constitution, well, you know.

Stay tuned. I’ll update when they call me back after “lunch.”

4:20 pm UPDATE: Looks like lunch is over and the judge decided to stick with Gov. Beshear. Appeal is a dead certainty.

Over a week ago we said something about the dubious jump in high school on-demand CATS writing scores for 2008.

Now, another education-focused blog is picking up this issue, speculating about the reasons behind the implausibly big rise in high school writing scores from the on-demand tests that are given during CATS testing.

That blog makes some good points, but it misses an even more obvious issue that has nothing to do with changes in scoring for “Novice” and “Apprentice” grades in CATS. The more obvious issue is the huge increase in the number of students getting the top CATS scores of “Proficient” and “Distinguished.” Supposedly, there were no changes to the grading for these top scores, and the impacts from the obvious inflation are much more severe for elementary and middle schools than for the high schools.

Unlike the high schools, the elementary and middle school scoring for on-demand writing changed in 2007, not 2008. Also, the grades tested shifted from fourth to fifth and from seventh to eighth (Let no one say that the CATS is a stable testing program).

In any event, as the figures below show, the jump in the percentages of students graded “Proficient” or “Distinguished” between 2006 and 2007 in both elementary and middle schools is so extraordinary as to be completely unreasonable. 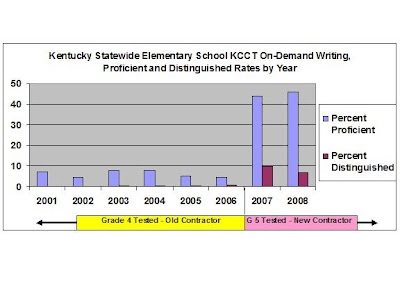 In middle schools, the trends are almost as severely unreasonable. Proficiency spiked from only 13.59 percent to 35.60 percent and the proportion graded “Distinguished” exploded by more than 600 percent (1.03 to 6.33 percent). Nothing in the middle school trends from 2001 to 2006 would predict such a massive, one-year change. 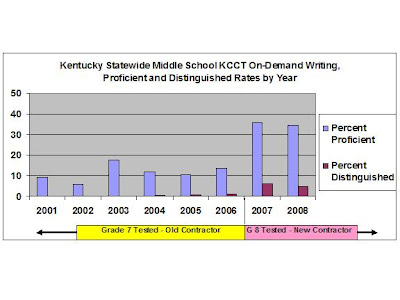 By the way, the National Assessment of Educational Progress (NAEP) tested eighth grade writing in 2002 and 2007. Kentucky’s change in writing proficiency rates on the federal test was statistically flat. The NAEP results indicate that the CATS writing was graded too hard in 2002 and then became grossly over-compensated by grading far too easy in 2007.

As I said earlier, let no one say that the CATS is a stable testing program, or credible, either.

How long will Kentuckians be inundated with such bloated nonsense while our education system struggles to make itself look good instead of moving out to do something that really makes a difference for our kids? Right now, entrenched education interests are defending the writing portfolio program to the hilt while evidence piles up from failures of similar programs elsewhere (like Vermont), and from the NAEP, and from several analyses of teacher opinions that overwhelmingly indicate the portfolios are part of the writing problem here.

And, inflating scores to hide the issue isn’t going to make one kid in this state a better writer.