The Bluegrass Institute is working on an emergency summit for Monday at 1pm in Frankfort to shine light on Gov. Steve Beshear’s effort to steal private web sites because he doesn’t like what they are saying or doing.

Don’t see any slippery slopes here, do you?

Better than tv: government eating itself

UncategorizedBy Jim WatersOctober 1, 2008
With all the talk about regulating our way out of the banking kerfuffle, it was just a matter of time before interest groups in Frankfort starting clamoring for more money under the guise of increased regulation.
So here comes the horse industry with an attempt to pull more money out of the General Fund for better “regulation”: 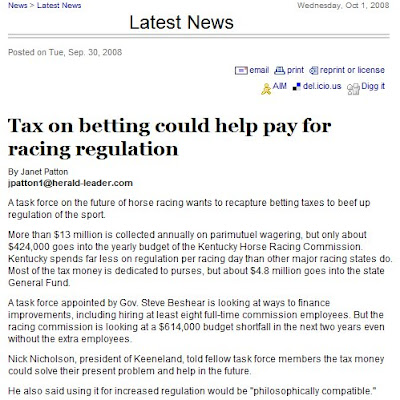 Nick Nicholson will never loosen the the legislature’s iron grip on that money — but it is a nice try. My favorite part is the “philosophically compatible” bit, as if philosophy had anything to do with it. Maybe he should try a Jedi mind trick.

How about an era of small government?

Citizens in Massachusetts are trying to get the state income tax there repealed and replaced by nothing:

With this going on just as the feds want American taxpayers to clean up their regulatory nightmare with our $700 billion, Kentuckians might want to think again about the $27 billion unfunded public employee benefits we have to deal with.

Do we really want to keep feeding our Kentucky politicians, hoping that their promises to straighten up their act really soon will someday be true?

Economist Steven Horwitz explains very clearly in “An Open Letter to my Friends on the Left” that too much government — and specifically too much collusion between business and government — caused the mortgage problems, rather than too little government:

“I know, my friends, that you are concerned about corporate power. So am I. So are many of my free-market economist colleagues. We simply believe, and we think history is on our side, that the best check against corporate power is the competitve marketplace and the power of the consumer dollar (framed, of course, by legal prohibitions on force and fraud). Competition plays mean, nasty corporations off against each other in a contest to serve us. Yes, they still have power, but its negative effects are lessened. It is when corporations can use the state to rig the rules in their favor that the negative effects of their power become magnified, precisely because it has the force of the state behind it. The current mess shows this as well as anything ever has, once you realize just what a large role the state played. If you really want to reduce the power of corporations, don’t give them access to the state by expanding the state’s regulatory powers. That’s precisely what they want, as the current battle over the $700 billion booty amply demonstrates.”

Continuing to push Frankfort to post state spending on the internet has been a frustratingly slow process for such a simple, no-brainer reform.

The E-Transparency Task Force meets Thursday, October 2, at 10 AM in room 171 of the Capitol Annex.

Showing taxpayers what is happening to their money in greater detail is the inevitable result of this song and dance. The only questions remaining when the resistance to this breaks will be “what took so long?” and “why don’t you expand the information available to us?”

If this is torture, chain me to the wall

A mere “Republican” group would hesitate before naming someone the best-voting member of the 2008 Senate one week and then, only two weeks later, rake her over the coals for repeating big-spender talking points.

But the Kentucky Club for Growth is way too principled to play that old game:

“In true liberal logic, they posit that raising his salary to prevent him from retiring saves the state from paying his pension plus a new salary to a new director. This time-limited truth has been parroted by legislative leadership like Senate President Pro-tem Katie Stine.”

Better not mess around when the Kentucky Club for Growth is on the job.