House Speaker Nancy Pelosi is out with her latest great idea: another $150 billion “stimulus” check. Good grief. If that worked, wouldn’t we already be out of the woods?

It’s not just about internet poker

“Jim Waters, who is the Director of Policy and Communications for the Bluegrass Institute, commented, “The Governor tried to slip this upon the Kentucky people, but failed when our coalition stood up in Frankfort and openly opposed using the force of government to trample on the rights and liberties of the people.””

Read more about it here.

Going deeper into debt during a financial crisis and credit crunch — let alone in the midst of a pension mess, structural deficits, and runaway entitlement spending — wouldn’t generally be considered good news for a poor state unable to get its spending and growth-restraining policies under control. 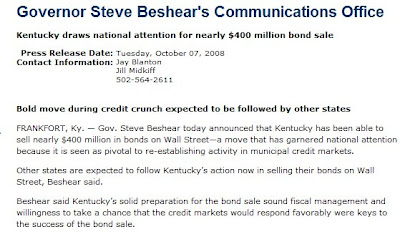 I don’t know why I’m watching this stupid presidential debate. In the first fifteen minutes, both candidates, supposedly from different parties, have each repeatedly touted the importance of introducing “stability” into the pricing of homes.

Why does anyone even think that is a good goal?

I thought the Kentucky Department of Education made all the big score-inflating changes to the CATS school assessment program last year.

It was announced in today’s State Board of Education meeting that yet another score-inflating item had been added to the high schools in 2008. The department changed the way the On-Demand Writing assessment is scored.

The impact is dramatic. Last year, the high schools got an Academic Index score for On-Demand Writing of 55.7913. This year, thanks to the change, the On-Demand writing score skyrocketed up over 16 points to 71.9879.

To put this in perspective, the Academic Index for high school Reading, Mathematics, Science, Social Studies and Arts & Humanities all declined from 2007 to 2008. Only Writing Portfolios and Practical Living/Vocational Studies showed small improvements of only a few points at best.

But, On-Demand Writing went up so much that it pretty much cancelled out the overall trend of decline in the majority of the CATS subjects.

This just adds more evidence that the CATS is going to get inflated as much as it takes to make the school system look good. If schools don’t perform – no problem; just inflate the scores to cover up the unpleasant facts.

The following table, derived from page 16 of the 2008 CATS Briefing Packet, shows the Academic Index scores across all high school subjects for 2007 and 2008. Check the inflation for yourself. 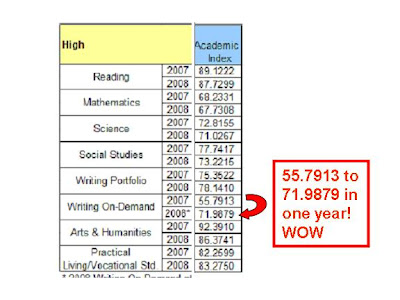 New York Putting More Than Your Financial Future at Risk

There seems to be a fair degree of sentiment that New York City is an epicenter of the current financial situation. But, New York’s dubious impacts on Kentuckians may stretch well beyond our wallets. Now, New Yorkers may be gaining undue control over the local news you are getting.

On September 26, 2008 I blogged about the Lexington Herald-Leader’s firing of both education reporters. That firing puts a great demand on remaining news sources to keep us informed.

Yesterday, however, I had a chance to talk to a Frankfort-based reporter for one of the major news services. I asked about that service’s recent obvious reduction in education coverage. The reply I got gave me considerable pause.

The news service controls its Frankfort bureau from locations outside Kentucky, most particularly New York. If out-of-state editors don’t have an interest, it doesn’t get coverage.

And, those out of state editors apparently are not interested in the serious issues confronting Kentucky education.

Thus, a major education news source often cited in many local papers in Kentucky has just about dried up. Added to the total failure of the Kentucky Post last year and the stripping out of both experienced education reporters at the Herald-Leader, it looks like bloggers are going to have to take up some (though we certainly can’t handle all) of the education reporting slack. And, with major issues such as funding, the troubled CATS assessment and Kentucky’s generally uninspiring progress on education sure to come up in the next legislative session, this lack of coverage is going to make it that much harder for all of us to stay informed. It will even make it harder for our elected leaders to get the word out about the things they are doing.

In the early days of this country, almost all were poor. But, newspapers thrived and the news was a hot topic. Informed citizens helped make this country what it became over the next two hundred years. If the citizens lose that ability to be “in the loop,” a crisis much larger than a considerable hit on your wallet – namely your very freedom as an American – may not be far off. And, the epicenter of that problem, once again, might be found along the northeastern coast of the United States.