In “KCTCS enrollment decreases, STATE BUDGET CUTS ARE CITED” the state’s community and technical college system blames money shortages for a drop in enrollment this year.

However, the fact that the news article reports enrollment is actually up at some campuses makes one wonder if something else might actually be going on.

For example, we know the youth unemployment rate in Kentucky is now the worst it has ever been since KERA began. So a lot of our 16 to 19 year olds are not prepared for the world of work.

Maybe, because the community college system, like businesses that hire direct from high school, draws from lower achieving students, the drop might be due to more kids at the bottom of the performance range being inadequately prepared to take on higher education and being smart enough to not run up a lot of debt just to prove it.

Just a speculation to start a conversation.

The GOP was in Minnesota this month, right?

Kentucky delegate to the Republican National Convention Steve Manning has this little detail from the party’s own platform: 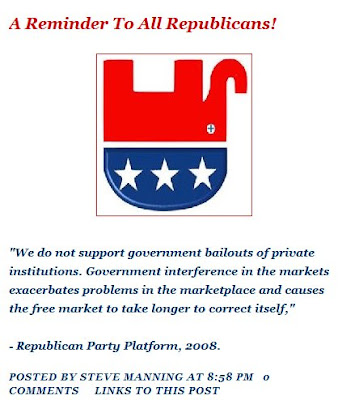 There must be a pony in here someplace

The Bluegrass Institute hears from our army of critics that all we ever do is complain. The word “solutions” is part of your name, they say, but you mostly just gripe about what you don’t like and attack, attack, attack.

While we see promotion of ideas like government spending transparency, public employee benefits reform, education reform, healthcare reform, and better labor policies as positive steps the state could — but won’t — take, we will admit to sounding — and feeling — like grouchy old bears sometimes.

But the evidence (click this link) keeps telling us we are right. In a sense, reality keeps feeding the bears.

“If Frankfort’s policymakers want to see that change, they can.”

“They could begin by heeding the advice of Arthur Laffer, a member of President Ronald Reagan’s Economic Policy Advisory Board, who wrote in the foreword of the “Economic Freedom Index” that higher migration rates for economically free states “confirms that states that cut their marginal tax rates, enact right-to-work legislation, and limit frivolous jury awards see an influx of capital, people and businesses.”

At the Institute, we see our role as that of a family member doing an intervention. Until we can get the people who control our state to see the error of their ways, we can’t stop trying. We love them, and the state we share, too much. Attacking us personally, as our ideological opponents seem to really enjoy doing, just tells us we are doing it right.

Another Education Fad Confronted by Reality

Sending school kids to algebra classes regardless of whether they get math basics in the earlier grades just doesn’t work.

The kids either get low grades or wind up in an algebra-in-name-only sham.

Will Beshear save us by taxing Mountain Dew?

Before the presidential race and the nationalization of the banking industry distracted from the fact that we weren’t supposed to be talking about rising state revenues in Kentucky, Gov. Steve Beshear was talking about raising cigarette taxes.

In Frankfort earlier this year, some lawmakers were talking about the evils of Mountain Dew. Might taxing that evil brew be part of Beshear’s next tax-raising scheme?
http://www.youtube.com/get_player

Which Schools Are Really Struggling? How Badly?

The Herald-Leader posted “Kentucky middle schools struggle to keep pace” today with a disappointing analysis of the recent CATS testing.

The title of the piece – assuming CATS scores were credible – is off target. Actually, the CATS shows the state’s high schools are doing notably worse than the middle schools. But, you have to read down 13 paragraphs before you learn that from this article.

The Herald-Leader claims the statewide CATS elementary school math score was 97. Actually, according to the statewide Kentucky Performance Report (available by clicking on the KPR Report link on this page), it was 96.9, rounded to the same level as the reported middle school score in the newspaper of 84.5. But, the true middle school score statewide was really 85.0, which is a larger rounding error.

Of course, the credibility of all the CATS “stuff” starts to fall apart if you look at other recent test results from the federally operated National Assessment of Educational Progress. In the national assessment, Kentucky’s middle school performance isn’t much different from the elementary schools, and both do a whole lot worse than CATS shows.

Now, consider what the CATS showed. The CATS in 2007 reported math proficiency rates of 60 percent for fourth graders and 49 percent for our eighth graders, clearly a claim of much better performance for both school levels than NAEP showed with and a much larger proficiency rate spread of 11 points between elementary and middle schools.

Anyway, I wonder who at the Herald-Leader has an axe to grind against the middle schools?

And, why does the Herald-Leader trust CATS to tell us about our school problems?