Playing much golf in Kentucky this winter?

Kentuckians who don’t play golf may not even know about the money they are spending to subsidize the activities of those who do. 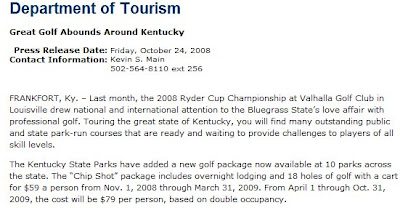 And of course this “special deal” doesn’t even include municipal courses in the state. Anyone care to take a stab at justifying this use of our public resources?

Illinois confused about its budget mess

A Paul Simon Public Policy Institute at Southern Illinois University poll shows what happens when a population gets too comfortable with big, expensive government.

The poll showed that Illinois favors a tax increase but only on “the rich,” and thinks that spending should be cut, but only for highly-paid government employee salaries.

The poll showed 73% of voters rejected spending cuts on services for the needy and 65% reject cuts for state worker pensions. The Illinois comptroller says the state has a $1.8 billion backlog in current bills.

In their panic, expect massive tax increases for the people in Illinois. It would help if their vast problems served as a canary in the big-government coal mine for Kentuckians.

Thanks to Americans for Tax Reform for passing this along.

“I’ve been pretty hard on Gov. Steve Beshear lately for his policy follies, but I also believe he’s done some things right.”

“I criticized the administration in this column for dragging its feet in getting the state’s checkbook online, Frankfort announced that by January 2009, hardworking Kentucky taxpayers finally will be able to see online financial transactions involving their tax dollars.”

“The governor gets credit — and with that higher approval ratings — for providing the needed leadership to make this a government not only “of, by and for the people,” but more accessible to them as well.”

It will be interesting to see how revealing and useful Beshear’s web site actually is.

Information in a new AP article indicates the days of Kentucky’s deceptive high school graduation and dropout rate reporting may be about over.

According to the AP, “Education Secretary Margaret Spellings is expected to issue new rules next week that will force states to use the common tracking system (developed by the nation’s governors) and will judge schools not only on graduation rates but on the percentage of black and Hispanic students who graduate, too.”

Tracking minority graduation rates at the school level will be something new for Kentucky. So far, our education crowd has steadfastly refused to do that because they know very unsatisfactory graduation rates – such as the ones we independently calculated and just reported for Louisville – exist statewide. Reporting grad rates for minorities will lead to more high schools failing to make the goals in NCLB.

We may not have to wait long for this to happen. Earlier this year, Spellings proposed rules that would require states to start using an interim calculation called the Averaged Freshman Graduation Rate right away for NCLB reporting. Kentucky already collects the data required to compute this formula.

Assuming the announcement earlier this year is not altered substantially in the final rule, by 2013 all states will have to operate high quality student tracking systems to enable using a high accuracy formula adopted several years ago by the National Governors Association.

It will be a nice change. The AP points out, “The U.S. was slow to realize it was facing a dropout crisis.” That’s because educators did everything possible to ignore kids who left high school before the 12th grade. And, educators used all sorts of reporting dodges that, as the AP reports, “clouded the picture.”

Well, it looks like the forecast is for clearing skies over the obscuration of what is really happening in our schools. Of course, those clear skies will leave exposed all the damage from the storm of deceptive graduation and dropout reporting that has been raging across Kentucky and the rest of the country.

How much will this free service cost?

“Tough economy” news stories are everywhere these days. WKYT has this one. Doesn’t Pike County have some belt-tightening to do? 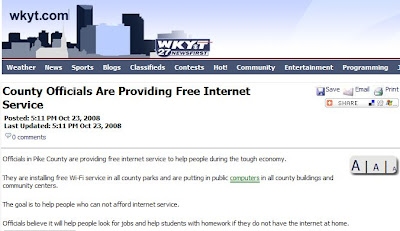 Is there anyone left in government who isn’t operating on the Karl Marx playbook?

Who decided we need professional politicians?

In a state whose political class has created an unsustainable public employee benefits program, a official tradition of secrecy, and rampant overspending, average Kentuckians can easily tell what is wrong with this New York City voting today to do away with term limits.

Can’t imagine that is going to really solve any problems.

Kentuckians might want to take this opportunity to ask themselves why we allow our politicians to gather so much power — our power — given the well-established track record for abusing it.