Who is being prohibited from doing what?

The Legislative Research Commission (LRC) posts General Assembly bills on its web site and provides summaries of them so readers can better follow state government. It usually does a very good job.

But the importance of word choice can be critical to the meaning in a bill summary. And sometimes the wrong word can lead to confusion about what a new law would do.

Take, for instance, this description of HB 46, pre-filed for the 2009 session:

A reader depending on the bill summary above may be led to believe that what is being prohibited is the use of a communications device (cell phone or pager) on a motor vehicle that is not almost an antique. The problem is the word “that,” which isn’t usually used to refer to a person.

Therefore a minor on a moped may find himself, if this bill were passed, subject to a fine for talking while riding even though he thought he was in the clear by virtue of operating, say, a twenty year-old vehicle.

In addition to the imprecise language, there are several elements of the proposed law that are missing from the LRC’s bill summary. Youthful drivers in the state might be better served by reading the following instead from KentuckyVotes.org: 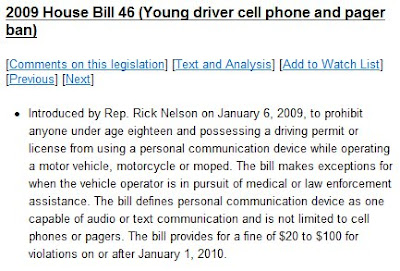 KentuckyVotes is a free service provided by the Bluegrass Institute.

Time to toss the union albatross

University of Kentucky economist Ken Troske nailed it in the Lexington Herald Leader today when talking about the proposed auto bailout:

“But the long-term situation is completely different, he said.”

“A bankruptcy would allow them to “break promises they made in the past,” Troske said. “That’s clearly going to hurt workers … but they’ve got to get out of those promises.””

The “promises” he mentions are the outlandish union contracts that have played a major role in bringing the domestic automakers down.

And as Kentucky politicians mull how to get their own federal bailout, they should turn their attention instead to repealing prevailing wage laws that make school construction projects too expensive.

Before the bailouts, transparency

Starting to look like 2009 will be the year of the bailout. Sure, we broke the seal in 2008, but next year is certain to be a gusher.

President Bush will leave $350 billion of the magic $700 billion to President-elect Obama. And the cities and states are arranging Washington D.C. junkets to parade their empty pockets and last year’s clothes in front of Congress.

Kentucky taxpayers has long-endured the boom-and-bust cycles in government spending. The tail end of this latest one is already awash in red ink.

We know there will be much clamoring for tax increases in Frankfort, but they just don’t have the votes.

The watchdogs must be ever vigilant, of course, lest the good old boys and girls work out some kind of deal to produce more photo ops and talk of bipartisan love for themselves, and higher costs for the rest of us.

The key to protecting ourselves is to push hard for every state agency, county, city, library, and school board in Kentucky to document the spending of every single penny on searchable web sites for all to see. The time for fooling around waiting for current technology to be applied to the protection of those of paying the bills is over.

CATS Deficiencies – More and More Legislators Get It

The Bluegrass Institute – from its earliest days – has sharply criticized Kentucky’s CATS school assessments and their underlying standards. While CATS has been telling Kentucky that our school system is doing just fine, more trustworthy evidence shows otherwise.

Now, with mediocre test results piling up, especially for Kentucky’s racial minorities, it looks like more and more legislators on both sides of the aisle are starting to ‘get it.’

This was particularly evident during today’s (November 17, 2008) meeting of the Interim Joint Committee on Education. The Kentucky Department of Education presented the latest results from CATS and No Child Left Behind, and legislators were quick to cite unsatisfactory performance gaps for whites and other racial groups, which persist today despite nearly 19 years of education reform.

The bad news triggered the following comments about general flaws in CATS from Representative Derrick Graham of Frankfort. Said Graham about a primary need to revise the underlying standards and curriculum driving CATS,

“Number one is when we talk to our universities and our colleges and our technical people that we get their input as to say what is it that you all want our kids – where do you want the kids to be by the time they graduate from high school? We need to get their input in terms of development of a curriculum, not that’s based on the CATS testing and evaluation of the CATS testing, but is based upon preparing these kids for the next level. And, I don’t think we’ve done that.”

Right on, Representative Graham. The high proportion of college freshmen who need remedial courses makes it abundantly clear that the CATS isn’t related to what kids need next. But, it needs to be.

As legislators in the meeting reacted in dismay to more data in the department’s report, including results from ACT testing that show very few kids are on track to be ready for college, sentiment certainly seems to be growing that after all the time we’ve been doing reform, making few if any changes in CATS for another six years simply isn’t going to pass muster.

Kentucky’s House Education Committee has killed every effort to open up charter schools in Kentucky.

Ohio, meanwhile, has charter schools and has found that teachers union efforts to close them would require taxes to go up or spending per student to go down because charter schools are more efficient with their money than the regular public schools are. 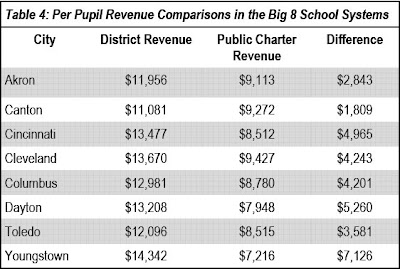 Kentucky probably will have a charter school bill in the 2009 General Assembly. Let’s hope the legislature pays attention to Ohio’s findings.

The Louisville Courier Journal dispatched three Frankfort reporters to take the temperature of the state Senate on what seems to be the paper’s last big idea:

“Health advocates are gearing up to persuade lawmakers of the need to approve a hike of at least 70 cents to discourage smoking, particularly among youths, and also to bring in desperately needed revenue.”

This dual purpose (cutting smoking and raising revenue) is pretty silly as far as empty promises go. But the hilarious part is the leap the reporters took from the tepid response they got to the conclusion they drew:

“But a Courier-Journal survey found substantial support for an increase to offset a potentially huge budget shortfall that would force more cuts in state agencies already slashed in the 2008 budget.”

The “substantial” support includes twenty Senators who said they would either vote for, consider, or not rule out a cigarette tax increase.

In other words, there is insufficient support in the Senate for a cigarette tax increase.

My favorite part of the article came when Sen. Tom Buford told the reporters he could potentially support a tax increase of up to $3 a pack.

Though it would be nice if the Republican Senators explained that they oppose cigarette tax increases because they don’t support terrorism, I’m sure they had a good time putting on a team of harried reporters.