“Measuring Up 2008, The National Report Card On Higher Education” from The National Center For Public Policy And Higher Education in San Jose, California, provides some really disturbing evidence about the slide in the relative competitiveness of US education compared to the rest of the world.

Figure 1 from Measuring Up shows we lag behind a number of countries in the percentage of our young people who are enrolled in college. 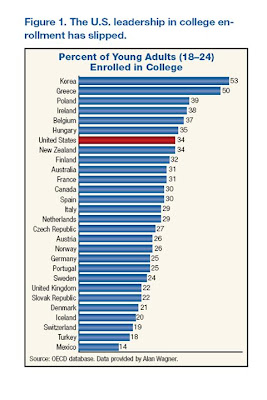 Next, Figure 2 shows that our rate of students completing college ranks much worse internationally. 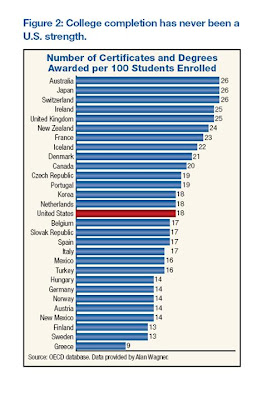 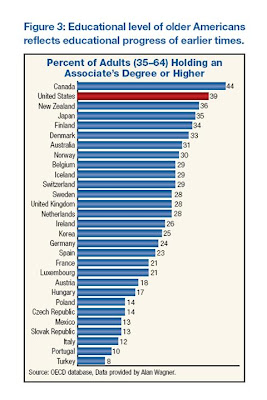 Things are not nearly so good for our younger citizens aged 25 to 34. They rank only 10th for educational level. 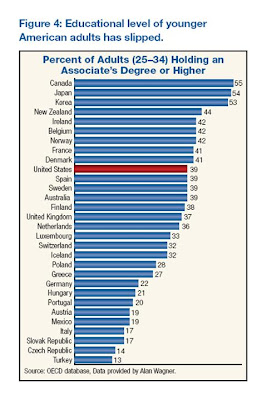 Note: All figures are from “Measuring Up 2008, The National Report Card On Higher Education.”

The Kentucky Department of Financial Institutions is thumping its chest today for helping extract a $1 million fine from — and shutting down — a web-based company that helps people lend or borrow money.

Great. Sure wouldn’t want anyone getting ripped off by an unregulated financial institution.

Kathy Gornik, CEO of Thiel Audio and Board Chair of the Bluegrass Institute, challenges the conventional thinking that assumes manufacturing is in serious decline in the attached interview with Investors Business Daily last Monday. Kathy “isn’t against outsourcing manufacturing to China. She just thinks her employees can do a better job.“

Kudos to Kathy Gornik, the hero of every productive worker in Kentucky!

An avowed supporter of free markets and global capitalism, she also warns, “The worst concept that is perpetuated by political leaders is that economics is a zero-sum game — that China’s gain in manufacturing jobs is a direct minus in the U.S.”

“Zero-sum game” thinking is what perpetrates the Frankfort attitude that the productive companies in Kentucky must “give back” to the unproductive ones, that the school districts with the most funding must be forced to subsidize the worst ones. What Kentucky institutions need is more courageous competitors like Kathy Gornik.

What if she were Gov. Beshear’s Economic Development Secretary?

Gov. Steve “Give a man a fish” Beshear speaks

Tough times have a great way of inspiring some people to see the world more clearly and sharpen their focus on things that really matter. And then there are those who send out press releases urging contributions to charity:

“In these tough economic times, we must remember those less fortunate and in need of everyday items that many of us take for granted. I encourage state employees and visitors to the Capitol to participate in our Feed a Family – Canned Goods Drive,” said Gov. Steve Beshear.

If Gov. Beshear’s words stir you up to donate to the needy, then more power to you. But Kentuckians are charitable people who don’t need a politician telling them to help out the needy when lower corporate taxes and better schools would create more opportunities for Kentuckians than holiday charity ever could.

And better schools doesn’t just mean more money for schools. Not until we make the schools accountable for the money they already have.

Leaving on a jet plane

I’m going to Washington D.C. Tuesday morning for a state coalition meeting hosted by Americans for Tax Reform and the American Conservative Union. Hope to pick up some good ideas.

Aided and abetted by the Kentucky State Board of Education, the Jefferson County Public Schools board has set a new, illogical low.

The problem actually starts with the Kentucky Board of Education’s new regulation. It requires all public high school students in Kentucky to take a math course each year; but, incredibly, it doesn’t say the kids have to pass all four years of math. Students are only required to pass three courses: algebra I, algebra II and geometry. There is no requirement to actually pass the fourth year of math.

In fact, there isn’t even a requirement for that fourth year to be spent taking a different math course. It’s a loophole loaded, poorly thought out regulation just begging for abuse. And, abused it was in the hands of the Jefferson County’s school board.

Under Jefferson County’s new plan, high performing kids who have already passed the required algebra and geometry courses in lower grades could still be denied a diploma if they don’t pass a fairly demanding fourth-year course like calculus.

Talk about creating inducements for smart kids to lowball their high school math programs! Will top performing students want to take a chance on a course like calculus if flunking it will cost them a diploma?

Talk about unfair! What was this board thinking?