Speculation has run rampant in Lexington since a pension reform task force meeting was abruptly cancelled earlier this week.

Chronic underfunding in the city’s public employee pension plan now necessitates a contribution from city coffers to the plans of 46% of salary.

Cities around the country are facing bankruptcy after years of the same kind of neglect.

Task Force no waste of time for Sen. Dan Kelly

Another blogger just reported on his interview with Kentucky State Senator Dan Kelly (See the article “A Softball for Dan Kelly” dated Wednesday, November 26, 2008 Here) and the recent Assessment and Accountability Task Force.

That other blog reports Senator Kelly didn’t consider the Task Force to be a total waste of time, but it is important to understand why.

When last year’s Senate Bill – 1 on education was floated, Senators Kelly and Williams took a lot of heat for not consulting teachers and educators prior to proposing the legislation.

So, Kelly took abundant opportunity in Task Force deliberations to sound out teachers and their representatives on the group about various issues of interest. No-one will be able to say that at least some of the proposals in the expected SB-1 in 2009 were not discussed with any educators – those discussions are on public record in the recordings of the Task Force. Kelly couldn’t have much more compelling evidence.

And, consider some of those comments.

When Doris Redfield, the testing expert on the Task Force, summarized results from the public comments, she indicated that 69 percent of the respondents, virtually all teachers, said writing portfolios were a problem when used for accountability. These teachers called for portfolios to be removed from CATS.

Redfield’s comments were immediately reinforced by Sharron Oxendine, another Task Force member and the head of the Kentucky Education Association. Oxendine said her organization surveyed teachers about two years ago and got virtually the same percentage of responses calling for writing portfolios to come out of CATS. Teachers in the audience at the first Task Force meeting were also queried and raised objections to portfolios in CATS.

The writing portfolio problem is that teachers have never been able to cope with the arcane rules they have to follow while teaching writing. Teachers have to follow these awkward rules so that they are not accused of cheating on CATS. These arcane rules turn writing instruction into a double guessing game. Making explicit, detailed red ink corrections right where the error is made for such things as awkward wording and the wrong or missing punctuation mark is verboten under CATS writing rules. Under the awkward CATS rules, teachers first have to constantly ask themselves what they are and are not allowed to do as they correct papers. Then, students have to decode these sometimes cryptic corrections. It’s a lousy way to teach writing, and our teachers know it.

I should note that some KDE presenters at the Task Force continue to say that all of these problems exist only because teachers have not been properly trained about what to do. However, after 16 years of failure in this area, this excuse now rings hollow. The Kentucky Department of Education hasn’t been able to fix this problem since it began in 1992; so, it’s rather foolish to think they will be able to do better in the future.

The portfolio-in-assessment supporters also lamented to the Task Force that removing portfolios from assessment will mean the demise of writing instruction in Kentucky. That’s nonsense. The National Assessment of Educational Progress (NAEP) writing evidence from states like Tennessee and California (evidence the Task Force avoided, even though it was requested by member Steve Stevens) indicates that writing portfolios in assessment don’t give Kentucky any advantages. The NAEP data indicates that portfolios in assessment actually are a detriment to effective instruction as our teachers allege.

In any event, Senator Kelly now has compelling, on the record evidence of what teachers think about this area – and that he most definitely talked to them.

So, Senator Kelly did indeed get things of value from the Task Force. In fact, the overwhelming indication that teachers want portfolios out of CATS, coupled with the fact that the Task Force ignored this testimony along with other critical information such as NAEP Writing Assessment results, gives Kelly at least two arrows in his quiver – one, an incontestable record that he did indeed talk to teachers and their representatives and that they want portfolios out; and two, that the Task Force was not data driven, not only because it ignored two separate samples of teacher opinion, but also because it failed to even discuss other important evidence like the NAEP, even though that data was fairly requested.

So, as I said above, Senator Kelly did indeed benefit from the Task Force, but that does not make the Task Force successful. Given the generally vague, repetitive (we are already supposed to be doing formative assessments) and incompletely researched (the TF never examined the possible cost to implement its Arts & Humanities recommendation) recommendations that were adopted, I suspect the Kentucky Board of Education will be sorely pressed to produce much of value from the Task Force. We’ll learn more about that when the Board meets in December.

Krauthammer gives them a hand

We aren’t gaining much clarity on our nascent bailout economy with the garbled mess coming from our talking heads and their big-media filters.

Perhaps they want to keep the air thick with dust to better angle for a bailout of their own.

The latest example of this muddle comes from Charles Krauthammer of the Washington post. His article in Friday’s Post discussed how we have tossed aside market incentives in our economy for political considerations and backroom deals:

“We may one day go back to a market economy. Meanwhile, we need to face the two most important implications of our newly politicized economy: the vastly increased importance of lobbying and the massive market inefficiencies that political directives will introduce.”

…and that is what most of the article is about.

But Krauthammer included this unfortunate passage near the end of his missive:
“The ruling Democrats have a choice: Rescue this economy to return it to market control. Or use this crisis to seize the commanding heights of the economy for the greater social good. Note: The latter has already been tried. The results are filed under “History, ash heap of.””
The part I have a problem with it “Rescue this economy to…”

Is he saying that all this bailing will cause the economy to recover? How is that going to work, really? Criticizing in advance the usurpation of the usurpers while also granting their first premise is like sticking one finger in the dyke while swinging a hammer with the other hand.

Looks like we needs some one-handed pundits, just as Gov. Steve Beshear warms up his own private airplane headed to Capitol Hill.

Meanwhile, Krauthammer’s unclear conclusion gave the Louisville Courier Journal an opportunity to continue the confusion with this headline on the same column: 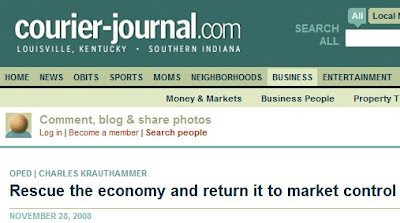 Those who doubt the wisdom of our present course must be clearer in opposition to reasoning for the multi-trillion dollar taxpayer-financed bailouts.

Kentucky Lottery loyalists foamed at the mouth earlier this year when Senate Republicans forced them to waste a little less money on advertising.

So, sales are up and education money is down:

“That’s because the lottery increased its prize payouts to players and paid higher retailer commissions. But the amount of money the lottery paid to state scholarship programs, including the Kentucky Educational Excellence Scholarship or KEES, decreased by about $4 million from $196.3 million in 2007 to $192.1 million in 2008, the audit found.”

Yeah, that wasn’t exactly the idea. We need to get the lottery folks out of the business of spreading around advertising dollars. And weaning ourselves of lottery “profits” would probably be a good idea, too.

The Interior Journal reports at least one Kentucky school district seems to think that maintaining a significant overstaffing in teachers at taxpayer expense is the right way to go even as more education funding cuts are being discussed in Frankfort and taxpayers are reeling from the bad news in the economy.

Local taxpayers in Lincoln County should pony up for this folly on their own because state education dollars drop when attendance falls.

With its classrooms emptying, Lincoln County seems set on keeping all of its teachers on staff, even if 48 of them are an overage even according to the district’s own finance officer. There are real fiscal penalties for this action.

Lincoln County certified to the Kentucky Department of Education earlier this year that they had 307 full time equivalent certified staff members, which are mostly teachers. An overage of 48 teachers is an incredible 15.6 percent overage. That’s a lot of tax money that could, and should, be going to something else, which might include better salaries for the teachers that should be retained on staff.

For example, in the 2006-07 school year, the average classroom teacher salary in Lincoln County was just over $41,000, so the 48 unnecessary positions cost an extra $1.97 million, give or take. If the 48 teachers were eliminated, the remaining teachers could share an average salary increase of nearly $8,000 – each.

I wonder if any other school districts are pulling the same, fiscally irresponsible stunt.

Here’s a neat little YouTube, just in time for the holiday.