Robbing Peter to bail out Paul

Congress seems determined to throw our money at Detroit without forcing the unions to renegotiate their outdated contracts.

Sensing an opportunity, some are demanding that now is the time to bail out cities and states without requiring them to bring employee compensation in line with the private sector.

Joe Conason in Slate.com offers this to Barack Obama:

“His first priority should be immediate, substantial financial aid to the states and cities that are now laying off thousands of public employees and preparing to fire thousands more. Rapid, generous assistance to localities would not only keep hundreds of thousands of workers employed, but would simultaneously advance national priorities in health, education, infrastructure, and energy efficiency.”

Gov. Beshear, get your private jet warmed up!

This is demonstrably false.

There is a vigorous interstate black market in cigarettes. People buy cigarettes in low-tax states and take them to high-tax states for illegal resale at a healthy profit.

Cigarettes in New York City are taxed $4.25 a pack. In Kentucky, it’s thirty cents. Do the math.

So, who is causing the problem? Think about this: if Kentucky and all other states raised their cigarette tax to $4.25, would the cigarette black market wither away or would it get a huge boost with the crime merely becoming more widespread?

On the other hand, let’s say every state eliminated cigarette taxes. What do you think would happen to the “black market?”

The tax increase advocates are really getting desperate. They would expend far less energy torturing logic if they just admitted that we have overspent ourselves into a mess.

Smaller government is the better answer.

Kentucky big-spenders’ fascination with cigarette taxes went beyond being merely embarrassing a long time ago.

And the beat goes on…

The Lexington Herald Leader reported in a news story today:

“a politically significant time — with the state government scrambling to fill a new $456.1 million hole in its present budget, Gov. Steve Beshear might be forced again to consider increasing the cigarette tax.”

“Might be forced again?” Beshear has been circling the state talking about little else other than raising the cigarette tax for months.

The legislature is getting played by Gov. Beshear and the big media/big tax types to get a cigarette tax passed. Make no mistake, a cigarette tax is a gateway drug to more damaging tax increases.

If we really want to cut public health costs related to smoking, let’s force welfare recipients to give up smoking as a condition of receiving further benefits.

Given all this drama, it is distressing to see a major tobacco lobbyist fail so miserably to grasp what is at stake here.

Thomas Briant of the National Association of Tobacco Outlets told the Herald Leader that Kentucky “should spread the burden around more widely than focusing on tobacco products. For example, why doesn’t it look at more taxes on wine, liquor and beer?”

Great. The tobacco industry serves a population that’s quickly becoming the easiest to pick on from a political perspective. Rather than merely trying to toss the hot potato at drinkers — a strategy that will result in higher taxes for smokes and booze — he would earn his pay by joining forces with those who oppose any efforts to grow government with any kind of taxes.

Could You Learn to Write With These Rules?

There was a lot of discussion – but no agreement – about keeping Kentucky’s Writing Portfolios as part of the CATS school assessments during the seven meetings of the Kentucky Department of Education’s Assessment and Accountability Task Force.

One of the many things the group never seriously examined is the very awkward and cumbersome scoring rules that teachers and students are forced to cope with in the writing portfolio program.

If you want to learn a bit more about what is wrong with this process, take a look at the following YouTube video.

Then, talk over this video with your student’s teachers. If that teacher is like the vast majority (69% according to data released to the Assessment and Accountability Task Force), we think you will hear an earful about how the awkward portfolio rules really hamper writing instruction.

Finally, ask your Kentucky legislator to remove this clearly dysfunctional program from the CATS. Our kids and teachers deserve better than this.

A political web site paints an odd image that Gov. Steve Beshear might want to reconsider putting out there as things move along in Kentucky: 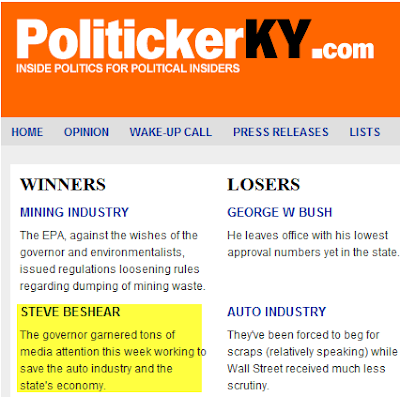 Thanks to Jake at PageOne for passing this along.

Bluegrass Institute rocks around the clock

Bluegrass Institute Director of Policy and Communications Jim Waters has hit the airwaves with a new series of ninety second radio broadcasts geared toward spreading the hunger for freedom from Pikeville to Paducah.

You can catch the broadcasts on one of the 99 Kentucky News Network radio stations near you. The first one is right here.