HillaryCare without the pantsuit

Here’s the money quote from Director of Health Policy Studies Michael Cannon: “He would create a new government program that would essentially double the size of the current Medicare program. And he would exert a lot more control over all sorts of decisions Americans make about their health insurance and their health care.”

Kentuckians long ago proved that too much government in healthcare is a bad thing. Massachusetts is currently confirming our findings. It is amazing that we have to continue having this kind of discussion.

Spreading it around some more this winter

One of the more encouraging notes in the discouraging rhetoric from both sides in the 2008 presidential race is the questioning of government redistribution schemes as a means for “spreading the wealth around.”

As your heating bills go up this winter, try not to think about how much more you will have to pay because the government wants to take credit for “helping” those who they deem worthy of receiving your money to heat their homes. 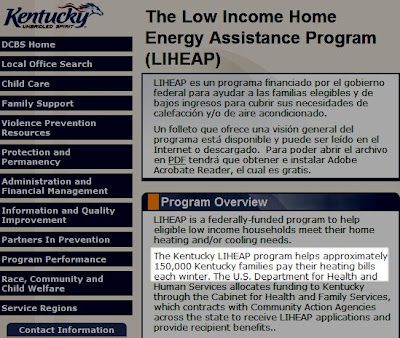 LIHEAP eligibility extends upwards to almost $30,000 in annual income for a family of four. Might be interesting to see how many of those recipients have cell phones and satellite dishes.

Of course, only a heartless guttersnipe would begrudge someone a redistributive bureaucracy — and full funding — during a cold winter. Even worse to point out that mankind survived a few years before there was automated indoor heating.

Maybe they will introduce a Joy Tax

Some people get awfully excited about college kids chasing each other with a ball. There’s nothing wrong with that — I’ve even joined them a time or two — it’s just that we all choose different things that engage our imaginations or even inspire us to greater heights.

Hit the link to this blog post from a man who finds the highest joy in the workings of capitalism — government “assistance” not required.

Of course government does take its cut of the capitalism. Perhaps if they knew someone was getting so worked up about it, they might try to send the tax man after him for deriving a previously untaxed benefit.

And this plays into a plan in Tennessee to tax bird-watching. Yes, I’m serious. The obvious questions for us then are: what if some of the birds being watched are actually across the border in Kentucky while they are being watched? Or if Kentuckians wander into Tennessee to watch some birds, do we tax them if they come home happy?

“Several months ago, I contacted Finance and Administration Cabinet Secretary Jonathan Miller regarding this situation. At that time, I proposed the idea of merging our state’s unemployment tax returns with the withholding tax returns as one proposal to aid in healing the quickly ailing unemployment fund.”

“By merging these tax returns, not only would the state save untold amounts of money on paper, printing, and postage costs, but the unemployment fund would receive a much needed infusion of funds. Furthermore, the money accrued through this merger would be deposited to the unemployment fund earlier, as opposed to waiting until the beginning of May.”

“I trust that you share my level of concern for this escalating crisis.”

Rep. Farmer has been a tax consultant for twenty one years.

Getting the Problem Right, At Least

“State education finance systems were not designed with student learning in mind, nor have the superintendents and principals who manage educational resources been trained to make the strategic connection between resources and learning one would expect in a learning-oriented system. What’s more, because of the way these systems operate, elected officials, educational leaders, and the public are equally hard pressed to know how resources actually have been deployed or the ways they may (or may not) contribute to learning.”

From the School Finance Redesign Project

This report, funded by the Gates Foundation, looks like an important “read.”

As expected Education Secretary Margaret Spellings announced important new regulatory changes to No Child Left Behind during a South Carolina news conference today. Spellings stated the new rules tighten up widely criticized loopholes and inconsistencies in state reporting of high school graduation rates and also deal with inadequate notification to parents when their child is entitled to supplemental education services.

States will be required to start using consistent graduation rate calculations by the 2010-11 school year, and the new rates will be required for accountability one year later. At the same time, states will have to report graduation rates for all schools and school districts disaggregated by race and poverty level, something Kentucky educators have never done. States will also have to create realistic graduation rate goals that don’t have loopholes such as one currently found in Kentucky where even a 0.01 point improvement each year is considered acceptable.

It is anticipated that once disaggregated graduation rates become NCLB accountable that poor performance for racial groups will be exposed in a number of schools.

Note: See our recent report on graduation rate gaps in Jefferson County schools for one of the very few available examples of this sort of data that has ever been assembled anywhere in Kentucky. If Jefferson County’s current graduation rate situation is replicated elsewhere in Kentucky, then many Kentucky high schools will have to make rapid improvements to say out of trouble with NCLB.

Spellings also said that once the new regulation takes effect parents must receive 14 days advanced notice when their child will be eligible for supplemental tutoring services under NCLB. Currently, our CATS-based NCLB system fails miserably in providing adequate notice in this area, and the new rules could force important changes in score turn-around times. Spellings noted stories of schools actively encouraging parents not to take advantage of tutoring, making it clear that such activity gets a frown in Washington.

Overall, it is clear that Spellings patience has run out with states like Kentucky that have made a mockery of some of NCLB’s requirements. Since the new regulations appear to have bipartisan support, it looks like those days are about to end.