Someone look at the chart below and tell me Kentucky is going to be able to compete with the U.S. government for borrowed funds to pay for expanded government health insurance for the middle class, decades of underfunding in public employee fringe benefits, and politically expedient corporate welfare projects from Pikeville to Paducah.

We already know we don’t have the money. Further, we know tax increases are not going to fly politically. And the casino economy in other states seems to have often made their problems worse just as our own lottery hasn’t made education any more affordable.

At some point, small government is going to win out in Kentucky. The only question remaining — and it’s not so much a question as just another warning — is whether we do it the smart way with massive spending cuts or wait until the house of cards comes crashing down. 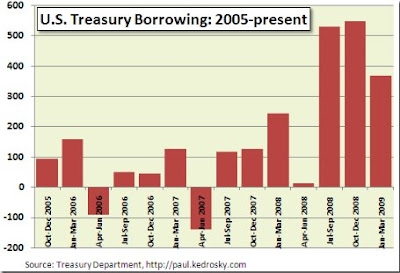 Starstruck Kentucky legislators are going to try again in 2009 to subsidize movie-making in the Bluegrass state. A very similar bill failed in the 2008 session.

It won’t get that far, but it would be great if these tax incentive bills spurred a real debate about why state officials feel the need to take tax money from some people and give it to others.

With news that most states are facing economic difficulty, now would be a great time to see them give up on the idea that they can create and run a bureaucracy that is better suited to picking winners and losers in the economy than market forces.

Get ready for this Thanksgiving turkey

It won’t be pretty.

It also isn’t likely to get sufficient attention. Sort of like the $35.7 million taxpayer liability found in the KAPT program last month.

The KRS numbers are much larger, but the public has shown little interest in grasping the implications. Just stick it on the state’s credit card and worry about it later.

It will be interesting to see how much longer that strategy works. Guess we could ask California.

If Kentucky is already in a recession, can’t we all agree now may not be such a great time to be raising taxes? 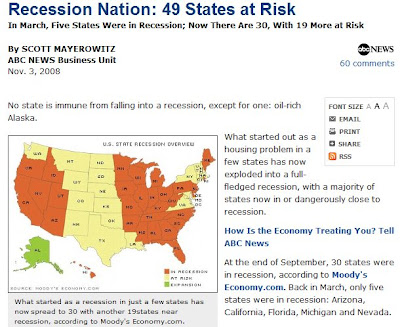 The antidote for a recession’s shrinking economic activity is policy that encourages more activity. Lower taxes and more economic freedom for taxpayers would be more sensible, don’t you agree?

“What is the voice of business saying in this election? The U.S. Chamber of Commerce is using its stash of cash for nationwide airing of YouTube footage, depicting an encounter between Kentucky AFL-CIO president Bill Londrigan and an unidentified videographer at a Paducah Labor Day parade. The Chamber bills this as illustrative of how “union bosses are pressuring Congress” to approve the Employee Free Choice Act. Passed overwhelmingly by the House earlier this year, it would eliminate secret-ballot elections and permit unions to organize by signing cards instead. While overwhelmingly endorsed by the House earlier this year, the legislation stalled in the McConnell-controlled Senate.”

Perhaps you noticed the word “overwhelmingly” used twice to describe how the House approved of the Employee Free Choice Act, which would take away the freedom of secret-ballot union elections. Hawpe can click his heels together three times and whisper “card check has overwhelming support” if he wants to, but that won’t make it true. Thirteen union-state Republicans joined Democrats in voting for the bill in what more accurately might be described as nearly a party line vote.

Labor unions have caused enough damage to Kentucky’s economy by keeping potential employers out. Avoiding card check, making Kentucky a right to work state, and repealing prevailing wage would provide more work opportunities for our citizens. We need that much more than we need to prop up union bosses.

A recent opinion piece in the New York Times by Lance T. Izumi, a senior fellow in California studies and the senior director of education studies at the Pacific Research Institute for Public Policy, shows that vague grading of writing portfolios in Kentucky is no secret elsewhere.

Per Izumi, the scoring is inflated and grading from student to student is inconsistent. A similar problem existed with Vermont’s writing portfolio program (at least until that state dropped this element of its accountability system).

So, what do people in California and Vermont know about writing portfolios that our CATS Task Force crowd just can’t agree about?