How we wind up electing nannies-in-chief

Cato Institute Senior VP Gene Healy was in Lexington at Thiel Audio this morning discussing his book “The Cult of the Presidency: America’s Dangerous Devotion to Executive Power.”

The book is about federal power but is applicable as well to the state level, where we elect governors who promise to provide jobs, healthcare, and a level playing field for the little guy.

And we wonder why our government officials effectively mortgage our futures by borrowing long-term money to finance unaffordable, but immediate, public desires:
[youtube=http://www.youtube.com/watch?v=_g6T5BO_XhE]

Yesterday, an employee in Gov. Steve Beshear’s press office promised to send me email copies of Gov. Beshear’s public statements on his promised efficiency study and to have Beshear’s spokesman call me with further information about when the study might be made available.

While waiting, I decided to check the Governor’s own press page on his web site. This is what I found just now:

Gov. Beshear is now openly proclaiming his campaign promise to avoid tax increases was nothing more than words to entertain the voters. Was his promise to save the state $180 million a year in expenditures the same kind of talk.

I think we need to hear from the Governor on this one, don’t you?

October state tax receipt numbers out Monday showed revenues increased $17 million over the same month in 2007. The problem remains, from the taxpayer’s perspective, that revenues aren’t increasing fast enough to keep up with the increased rate of spending mandated in Frankfort.

As this same scenario continues to play out over the current budget year, it seems that spending cuts, rather than tax increases, would be the preferred prescription to restoring government’s fiscal health.

In other news, state lottery revenues continued their upward climb after this year’s cuts in advertising expenses for the Kentucky Lottery Corporation. The state’s take is up $2.5 million since July.

Well, there’s $180 million down the drain

A year ago, Gov. Steve Beshear was pretty sure that his promised “government efficiency study” was going to pave the way to annual savings of up to $180 million dollars.

His press office reports this afternoon the study has not been completed.

The Kentucky Department of Education’s “Assessment and Accountability Task Force” (often called the CATS Task Force) appears to have ended its 2008 session with little accomplished.

On the most heavily discussed item – writing portfolios – the group remained hopelessly deadlocked following discussions rich in agendas and assertions – but short on examination of real data.

Five meetings after task force member Steve Stevens requested discussions on how Kentucky performed on the National Assessment of Educational Progress’ eighth grade writing exams, that revealing information still has not been discussed (Thanks to two Bluegrass Institute YouTube programs comparing writing performance in Kentucky to California and Tennessee, this blog’s readers can learn more in less than five minutes about how Kentucky really stacks up in writing instruction than most task force members know).

Thus, perhaps the most unreliable element in the entire CATS program festers on without any recommendation from the task force.

Sadly, thanks to the time expended on the portfolio back and forth, many other important agenda items never got any real consideration. Find those overlooked items listed along with a general discussion of other matters from meeting 7 in the Bluegrass Institute’s new policy Wiki.

The Wiki also lists the task force’s four recommendations. Considering the limited amount of discussion most of those items received, and considering the very large number of unanswered technical questions on each recommendation (things like how much they will cost, for example), I won’t use space here talking about them – except to say that I don’t see how the Kentucky Board of Education or the legislature will get much of use from them.

In fact, one of the best judgments on this task force has been the absence of reporters at any of the meetings. Clearly, the major media in this state were not impressed by this effort.

Something that needs discussion is the fundamental problem with this task force. Because the legislature used this task force as an excuse not to conduct its own hearings on CATS during the legislative interim, the task force needed to be unbiased. It should never have been convened under the control of the Kentucky Department of Education.

The department of education has a lot of earnest people, but it also has too many pride of authorship issues to conduct a fully objective and open discussion of CATS. The problem was clear from the outset, when Commissioner Jon Draud stated that he didn’t want the task force to recommend any major changes to CATS. That position cast a shadow over what followed.

Certainly, the department’s position that major changes should wait until after 2104 was hotly disputed by some task force members like Senator Dan Kelly (good job, Dan) and a number of very honest educators on the committee, too. However, the overall makeup of this group virtually guaranteed it would be unable to reach consensus on important issues.

So, here are some suggestions to move us forward.

The Kentucky Supreme Court ruled that the legislature, not the Kentucky Department of Education, is ultimately responsible for education in the commonwealth. Our legislators need to acknowledge that and take over management of the task force, reconstituting it to get results, not inaction.

It’s also time to stop ignoring uncomfortable data about CATS. The results of writing portfolio audits have always told us the same thing – portfolio scoring is inherently unreliable and inflated. Failure to look at the strong evidence about Kentucky’s writing performance from the National Assessment of Educational Progress is simply inexcusable and was an unacceptable snub of Steve Stevens, as well.

It’s time to listen to our teachers, who courageously and emphatically stated in task force meetings that having writing portfolios in the assessment program actually interferes with their ability to teach writing. The national assessment data shows that – but this CATS Task Force doesn’t know that.

Anyway, with another year passed, CATS remains no better than it was – unless the legislature moves on its own without paying much, if any attention, to the task force. Of course, in the end, there really isn’t much from this task force to pay attention to, anyway.

What about school choice now? 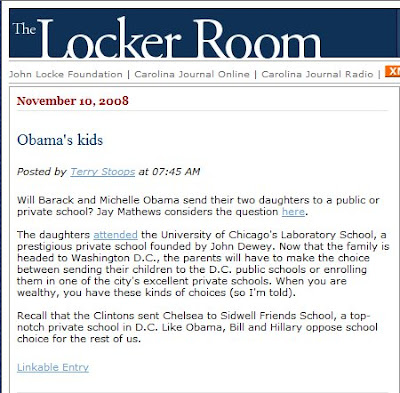 Obama’s campaign rhetoric stirred up hope for some Kentucky school choicers. It will be interesting to see where he goes on this one.