How much money would you lend Frankfort? 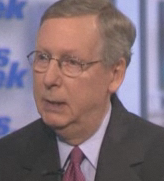 Speaking Sunday on ABC’s This Week program, U.S. Senator Mitch McConnell suggested giving federal tax money to states may not be the best idea. Instead, he said the feds might loan the money:

“It might make sense to lend the money to the states that will make them spend it more wisely,” he said, “If the money were lent rather than just granted, states would, I think, spend it wisely and the states that didn’t need it at all wouldn’t take any.”

Does differentiating between gifted money to be blown and borrowed money to be spent judiciously really sound like part of the thought process in Kentucky’s state government?

That rationale didn’t do much to protect taxpayers forced to bail out bad-risk home “buyers” who borrowed money rather than have it given to them.

Without secret ballots, union representatives could strong-arm workers into checking a card indicating their desire for a union.

A national organization is taking the battle against “card check” unionization to the states with the following proposed state constitutional amendment language:

Efforts are already underway in Arizona, Arkansas, Missouri, Nevada, and Utah. Kentucky’s legislature is pretty well tied to big unions, but our General Assembly should have to explain why they want to take voting rights away from workers.

Missing the boat on pension reform

An odd story in a national investments magazine perhaps sheds light on why so few people have expressed appropriate shock and horror at the huge mess Kentucky officials have made of our public employee fringe benefits system.

Pension and Investments Magazine quotes (misquotes?) Finance and Administration Cabinet Secretary Jonathan Miller understating the size of Kentucky’s problem by six billion dollars and, in the same sentence, characterizes Gov. Steve Beshear’s recent attempt to make the problem worse for cities and counties as part of his effort to “shore up” the retirement systems. 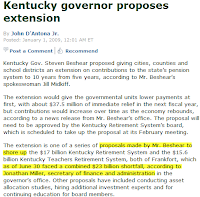 If the “experts” can’t even size up the problem properly, how can a meaningful segment of the electorate hope to assess this looming disaster before it is too late?

What would your top priority be?

As the 2009 General Assembly starts up, the most commonly searched bill on KentuckyVotes.org for the new session is Rep. Bill Farmer’s tax reform bill.

It is clear that state government’s most immediate needs involve cutting spending dramatically. Changing tax and regulation policies to better encourage growth are certain to get short shrift in the current political environment, but it is encouraging to see some people trying to get the conversation moving in the right direction.

Some big-spending legislators returning to Frankfort next week will easy to spot by their “Brook trout face” (blank stare, mouth agape in shock).

That’s because of the massive accumulated compensatory leave time balances that would have to be paid out to laid off state employees. We don’t have nearly enough money to justify cutting costs by downsizing employees and most people don’t yet realize the enormity of this problem.

It’s yet another Catch-22 we have put ourselves in by expanding government so far beyond our means. Eliminating prevailing wage, corporate welfare, and certificate of need have to be looking better even to those politicians whose supporters demand that they ignore the efficacy of those policy changes.

How has bailing out colleges gone so far?

The death of former Rhode Island Sen. Claiborne Pell hasn’t stirred up debate about how our government policies impact the cost of a college education. Perhaps it should.

Given our ever-increasing amounts of federal aid to colleges over the years, one might be tempted to believe the aid played an unintended role in creating tuition inflation.

But then we all know Sen. Pell and his comrades had only the best of intentions, so that can’t be right. Never mind.