Welfare recipients have satellite tv, too

News from California that the state will suspend welfare checks in two weeks will provide ample video for tv news of the coming riots. 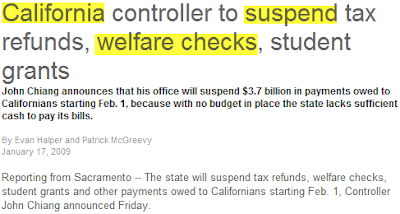 ” />
Less visible, perhaps, will be the worried welfare recipients in other states across the nation moving to where the money flow may be a little more secure. As that image settles in, think of the shocking fiscal woes in Illinois and the fact that Kentucky is relatively better off.

A one-way ticket on Greyhound from Chicago to Louisville is only $57. Kentucky should seriously consider limiting public assistance to new arrivals from other states rather than merely hoping no one else is thinking about this.

Some Kentuckians who have come to depend on Kentucky Homeplace Program for free medical services are now out of luck.

The program is out of money and has been closed.

Framing the problem as a “budget shortfall” is a convenient way to make the case for tax increases. But whether Frankfort is bailed out by federal taxpayers or state taxpayers fails to address the persistent issue of too much spending.

And the main point is that programs like this seek to spread dependency on government to people who have too much income to qualify for Medicaid. And when they fail there will always be people they can prop in front of cameras to make the case for another, bigger program.

How many failed programs must we endure before we stop setting up more government programs to buy healthcare for people who could buy it more cheaply if they didn’t have to compete with the government for medical services?

That last question may take a little while to sink in. It’s a shame that living without government manipulation of healthcare in America is now an abstract concept.

This is how things get fixed

The hand-wringing about the economy wouldn’t be nearly so frenetic if more people just looked at the gasoline market. There, demand went down and prices followed. Producers who overextended on the way up (think Venezuela) will get hit hard by gravity. Those who kept their wits about them when demand was high (like Exxon) have proven themselves well-prepared to ride out the storm.

Not forcing banks, auto makers, and cities and states to live by the same rules is a mistake we will be paying for a long time down the road. When demand goes down and prices are allowed to respond in kind, markets shake out inefficient producers, rewards efficient ones, and the world goes on. Training a generation of bankers, auto execs, and politicians to default instead to feeding at the federal trough can’t possibly be justified in light of this simple truth.

This one seeks political cover, er, excuse me, a long-term solution for the impossible to fix unemployment insurance (UI) program. Think Social Security, but funded by the states and minus a few zeroes.

Surprising no one who has been watching, Kentucky’s UI trust fund is almost empty. That means we get to borrow from the federal government to pay more people not to work.

Gov. Beshear blames the problem on the economy:

But the problem with UI is that it is another New Deal program that will only “work” if taxpayers continue to pour more and more money into it. In much the same way that private disability insurance protects workers from unexpected injuries or illness, though, private unemployment insurance could offer coverage for job loss without the government bureaucracy, politics, and very predictable cost overruns.

Kentucky officials aren’t going to see the natural consequences from decades of overspending as soon as they should. Below is the federal “stimulus” bailout coming their way. The crazy thing is that this only delays the inevitable. And probably not for very long as the biggest thing we will stimulate with this move is irresponsibility and dependency.

About the time Chysler, GM, and Ford come knocking again, we can probably expect the states to be lining up for some more love.

One of the biggest challenges to learning about what works in education is finding reasonably well done research. I’ve commented on that before, and many other people, such as Arthur Levine, past president of Columbia Teachers College (one of the oldest and best known teacher training schools in the country),agree.

Nowhere has there been more of a smokescreen about what really works in education than for charter school performance.

Now, researcher Jay Greene has assembled a list of quality research reports on charters that do acceptable “apples to apples” comparisons with regular public school performance. Greene’s studies focus on those schools where admissions have been randomly controlled in ways that provide fair comparisons to the schools those students would otherwise have attended.

These reports indicate that charters are making a positive difference in test scores and graduation rates. You just have to sift out all the unscientific (dare I say biased, apples to lemons) reports to learn this.