With defeat of the bailout bill Thursday, the Detroit situation becomes analogous to the one in Frankfort. State agencies have been predicting widespread death and destruction should they be forced to make do with less taxpayer money.

Might be interesting to see the political fallout if part of the auto industry survives sans bailout. Same goes for Frankfort.

Governor’s Budget Plan Could Go Up in Smoke

I was at the Kentucky Board of Education meeting today when the governor made his announcement about proposed budget changes to deal with the current fiscal situation.

Board members were relieved when it was announced that the governor’s plan exempts the school funding system, known as SEEK, from any cuts and hits the department of education in other areas for a less-than-average two-percent reduction.

Then, the Grinch arrived. A board member pointed out this is all contingent upon a 70 cent hike in the cigarette tax. If the governor doesn’t get the revenue that is anticipated from that huge tax hike, then all promises are off.

Gov. Steve Beshear, fresh off his tax increase press conference this morning, now wants your money for the auto bailout. He said:

“I am pleased that the House of Representatives passed last night emergency loans to the automotive industry, and I urge the United States Senate to quickly take the same action. At this time of economic uncertainty, I believe Congress should do everything in its power to assure that the auto industry maintains a strong economic foundation.”

Correcting it’s problems by reversing bad business practices would certainly be a better way to build a “strong economic foundation” would work better than keeping the bad practices and taking taxpayer money.

Sanity to the rescue

“Comprehensive tax reform that will reduce the tax burden on productivity, and thus allow our economy to grow, is the only real answer to this crisis. Until we face this fact, our Commonwealth will continue to bear these difficult decisions.”

Thanks for stepping up, Secretary Grayson. Too bad there is not enough of this sentiment in the legislature. Tax increases are not part of the answer when too much government spending is the biggest part of the problem.

Gov. Steve Beshear plans to announce his tax increase proposal in a 10 AM press conference.

It appears nothing stops the forward progress of big government.

The Infectious Greed blog passed along the following bond addendum filed by the state of Illinois in the process of trying to borrow $1.4 billion after the arrest of Gov. Rod Blagojevich. 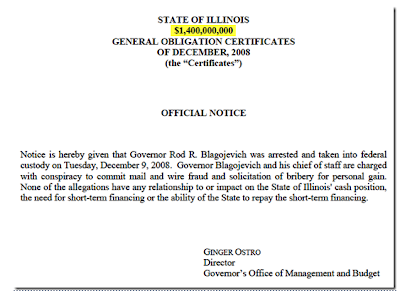 It’s not the same thing, but when I saw this it immediately made me think of a very similar dollar figure that some in the state of Kentucky want to keep quiet.