An experiment worth trying?

While Kentucky school officials are talking about maybe losing 4% of their state funding, Kansas schools this month got a 25% haircut: 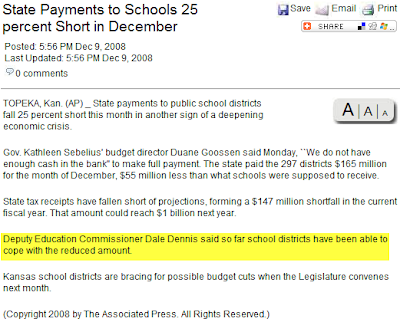 It comes as quite a shock for a Kentuckian to see the Kansas education official say that they had been able to make it work.

Could the same thing fly in Kentucky? We don’t really know because fiscal accountability in Kentucky schools is so bad.

Fees and Dues in Kentucky’s Schools

Kentucky’s Constitution requires a system of free public schools, but that is probably a surprise to most parents. On December 9, 2008, the Kentucky Office of Education Accountability (OEA) reported to the legislature’s Education Assessment and Accountability Review Subcommittee that most schools charge students widely varying amounts for dues, fees and supplies. The OEA also noted that there are inadequate standards and no real accounting for these programs, and that federal laws are being violated.

Parents get hit with all sorts of school expenses. For example, Kentucky’s schools require parents to spend personal money for student supplies such as pencils, paper, glue and scissors.

In addition, schools often collect fees and dues for such things as clubs, parking, and team memberships. Examples cited in the OEA’s presentation included an average fee to join middle school dance teams of $190 (Yes, that is only the average) and a nearly as high $165 average fee for a middle school student who wants to be a cheerleader. Furthermore, data I extracted from Table 3.7 in the OEA report (Report not yet on line — see the table below) shows that per-pupil fees can be very different even in schools with generally equal poverty rates (note the three high schools highlighted with the red arrows — eligibility for the federal free and reduced cost lunch program is a commonly used indicator of student poverty rates) 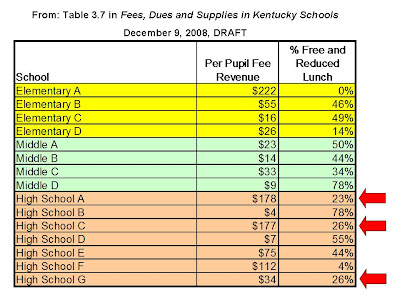 Detailed information about the dues and fees system is lacking because the accounting of these programs is wild, uncharted territory. The OEA indicated that the Kentucky Department of Education has no standard reporting process to monitor dues and fees programs. While the OEA didn’t mention it, that opens the door for fraud and abuse, which has occurred in the past with these sorts of funds.

The OEA did mention another legal issue, saying that some schools hold student education records hostage to force parents to pay dues and fees. That, the OEA points out, is a direct violation of the federal Family Education Rights and Privacy Act.

The OEA also jumped on the eternal hot button topic under KERA – equity in funding for schools. With total fee revenues in the seven sample high schools running from a low of just $2,620 to an astronomically high $313,492, some kids clearly get a lot more from school than others. Thanks to the absence of reporting, the KERA funding system doesn’t see this inequity at all.

If your school charges outrageous fees, and especially if they hold student records hostage for non-payment, we’d like to hear about it. Let your legislator know, too.

“Obviously, if I reach that point where I feel we can’t do this whole thing by just cutting, (the cigarette tax) is one of the obvious areas I would turn to,” he said. “I think the vast majority of people support an increase in that tax anyway, it would give us substantial revenue and it would give us some great health benefits.”

Clearly, a “majority” of people prefer getting government checks rather than paying taxes, but that doesn’t make it right or good. Further, to figure that a cigarette tax increase will raise “substantial revenue,” one must ignore the lost retail activity from the people in five surrounding states who will no longer come to Kentucky for cheaper cigarettes. And how great are the revenues going to be if people either opt for the “health benefits” of not smoking or the alternative of black market or online cigarette purchases?

The big spenders in Frankfort will have Cheshire Cat grins for sure if we fall for this flimsy reasoning and open the door to tax hikes in a fake attempt at resolving our overspending problem.

Lexington Mayor Jim Newberry this morning urged taxpayers to let him delay further the day of reckoning for the city’s fire and police pension funds, already underfunded by $246 million.
In a statement, Newberry said:

“By issuing a series of bonds over the next 5-6 years, we can (a) fully fund the Fund in 5-6 years, (b) phase in the added financial obligations, and (c) avoid the dire consequences of an across the board reduction in local government services.”

Lexington previously scheduled to sell $70 million in pension bonds in 2009. Contract debt is already the third largest item on the city’s list of current liabilities.

To his credit, Newberry appears ready to lower pension benefits to ease the burden on future taxpayers:

“Tomorrow, I’ll discuss the need to change the benefits for our new hires so we don’t find ourselves in similar predicament in the future.”

It seems that with the mounting debts, however, cities like Lexington are headed inevitably to an inability to provide lavish lifestyles for layers of bureaucrats running superfluous programs and tying up resources that could be put to better use in private hands.

Putting all government expenditures on a searchable web site would be a great way include taxpayers in the process of getting spending under control.

Two news articles running within days of each other provide more evidence of the massive amount of confusion the public is getting about the real education situation in Kentucky.

Over near the East end of the state, the Daily Independent in Ashland complains that college enrollment in the state is moving in the “Wrong Direction.” The paper laments the drop in freshmen enrolling in Kentucky’s university system this fall, placing the blame on the rising cost of tuition.

The tuition rise seems like a reasonable explanation for the enrollment fall-off – until you read the Courier-Journal’s “Valley closes college ‘deal.’” The Courier reports that seniors at the Valley Traditional High School in Louisville just attended an event where they were encouraged to go on to college by representatives from 16 colleges. These students got a host of financial information about how kids from this high poverty school can afford to go on to postsecondary schools.

Even Louisville’s Mayor Jerry Abramson got in the act. “There is no one in this room who can say ‘I cannot afford to go to college.’ It’s just not true,” Abramson said. “You may not want to go to college, but you can afford to.”

How’s that, again? How can the paper in Ashland say college enrollment is down due to costs while the mayor of Louisville says even his poorest kids can afford higher education?

Let’s sort through this confusion.

The mayor of Louisville is partly correct – there are lots of ways for kids to come up with money for college – if they really are qualified to go.

The problem is that very important point – qualified to go.

Valley High is one of the very lowest performing high schools in Kentucky. During the last school year, the kids who are now in the senior class got exceptionally low scores on the ACT college entrance test. Out of 232 public high schools in the state, Valley ranked 224 with scores in English, Reading, Math, and Science that were all far below the ACT Benchmark scores that signal decent odds of success in a typical college. If most of these kids can get into postsecondary education at all, they are going to require a lot of non-credit remedial courses. Those non-credit courses run up the expense and time required to get a certificate or degree. Without a lot of self-motivation and willingness to pick up a considerable amount of debt, most kids with such low ACT scores won’t make it. That’s one major reason why only half of Kentucky’s entering college freshmen graduate, even after six (not just four) long and expensive years of study.

I find it hard to believe the mayor doesn’t know the sad facts about a school in his city. I certainly support him in trying to encourage kids to aim higher, but some realism is needed – along with some real mayoral heat concerning this chronically low performing school. After all, these kids who are being left behind are his constituents. Is the mayor camped at meetings of both the local board of education and the state board of education? He should be.

So, does this mean the Ashland paper got it right? Not necessarily.

The Daily Independent implies the statewide drop in college enrollment is solely due to rising tuition. I would suggest more factors are at play, including one really key item – more kids now understand that if they don’t get a good education in the public school system, it is expensive and time-consuming to try to fix that in college. Maybe more of these kids are simply recognizing the obvious – they are not prepared, and fixing their deficiencies is going to cost more than they want to spend.

So, here’s another reason for Kentucky’s dropping college enrollment – the continued poor performance of our public schools that is masked by inflated scores from our CATS school assessments. Because CATS is generally the only testing data that kids and parents get until well on in the child’s school career, inflation in the CATS scores provides a misleading picture of actual educational progress. Once kids finally take the ACT and learn how well they actually are prepared, more of our kids might simply be realizing that they are not prepared to make the big sacrifices college will require.

The fix here isn’t to throw more money into college tuition for kids who are highly unlikely to succeed. Rather, we need to seriously focus in on why these kids are being failed by the entire school system in such large numbers. A great place to start is to put the CATS assessments under a real microscope to figure out why they are giving us such inflated reports of progress that mislead everyone from mayors to newspaper editors. We need to do it soon, because the mayor and the Ashland paper are both right about one thing, in the new economy, having more than just a high school education isn’t just a ‘nice-to-have;’ it’s an essential.

Hosing the poser in one easy lesson

“If he is truly empathetic with Kentuckians’ financial situation, perhaps a more appropriate response would be to join me in holding the line on taxes.”