The Kentucky Club for Growth today urged legislators not to back up on their promise to start digging us out of our more than $30 billion public pension hole and to vote against House Bill 117.

The Club’s Andy Hightower asks the only question left to ask:

“HB 143, just passed, borrows significant sums from the retirement system. Now HB 117 would delay payments into the system. How much will the next bill take from the system?”

Seems like only last June they were promising us they were going to get serious about the largest hole in our state’s finances.

In fact, it was only last June.

WEKU Radio’s Stu Johnson on KERA Issues Before the Legislature

Click the play button on the left side of the audio slider to hear this interesting commentary.

It’s gratifying that even Bob Sexton over at the Prichard Committee now agrees with a long-standing BIPPS position that our CATS school assessments need extensive reworking.

Also, note that Susan Weston continues to contend that Kentucky’s kids score about average on the National Assessment of Educational Progress. We showed a few days ago that this certainly isn’t true for Kentucky’s White students, who comprise about 85 percent of the students in Kentucky’s public schools.

While I was putting together a response to another blog, this grammar correction ‘gem’ popped up in Microsoft Word. 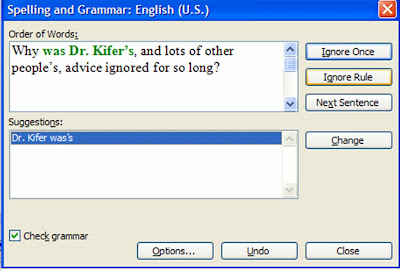 Until very recently, Kentucky’s teachers graded writing on a “holistic” basis, meaning that the grade was based only on an overall impression. Spelling, grammar and punctuation were deemphasized in this scoring scheme.

One argument used to support this bad idea was the claim that spelling and grammar checkers in word processors made it unnecessary for kids to know the mechanics of writing.

Nearly two decades of our kids suffered under this crazy notion before Kentucky’s teachers were told to grade writing differently. Supposedly, spelling, grammar and punctuation matter once more (at least in those classes where the teacher has reasonable mastery of these skills herself – keep in mind some of today’s teachers learned writing as “KERA kids”).

Unfortunately, wrong-headed ideas about writing were staunchly defended and prevailed in Kentucky for far too long because educators refused to listen to reason.

Now, some of the same education crowd desperately clings to our dysfunctional CATS assessment program. Despite clear evidence that CATS scores are misleadingly inflated, untrustworthy and constantly getting more so, status quo educators have been dragging their heels. They wasted last year with their largely dysfunctional Assessment and Accountability Task Force, making it clear that they wanted to delay meaningful changes until after 2014. Now they just made it clear again that they would prefer to drag out any changes for maybe another half-decade or more.
Meanwhile, our kids would continue to suffer in a program loaded with too much test preparation and too little real education.

There’s a lesson here. Since KERA began, key state educators time and again have emphatically told us things that just were not right. After all these years, their credibility has worn a bit thin. Delay fixing CATS for another five years? If we listen to that bad advice, we’ll just be sacrificing another half-generation of our kids.

Thirteen current Kentucky state Senators promised never to support tax increases. If they keep their word, their votes will be sufficient to force the governor to face up to wasteful spending policies.

They are twelve Republicans and one Democrat.

Who will they come for next?

Global warming got a huge boost from all the tax increase hot air on the House floor in Frankfort today. Rep. Stan Lee, however, went straight to the heart of the whole charade.

This is just the beginning of the tax increase effort from the House.
http://www.motionbox.com/external/hd_player/type=sd,video_uid=309dd8b5191ae5c1be

The “who’s your daddy?” bill

The Family Foundation of Kentucky announced today its opposition to HB 28 with an interesting take on the bill:

“The bill, House Bill 28, would allow the father of child born from an adulterous relationship with a married woman to claim parental rights to the child even after the woman had reconciled with her husband. The bill would effectively overturn the Rhoades v. Rickett’s decision in which the Kentucky Supreme Court ruled last year that the marriage prevailed over the biological father’s claim.”

“Proponents of the bill argue that the mere fact that a man is the biological father of a child is sufficient to warrant parental rights, but Cothran argued that this has never been the case. “If you take this argument to its logical conclusion, then the biological father of a child born through in vitro fertilization to a mother married to another man could gain parental rights. In fact, if biology trumps everything else, what stops a rapist from claiming parental rights?””