Finding Our You Tube Videos

The Institute has a number of You Tube videos on subjects of interest in Kentucky.

For those of you who want an easy way to find these videos, here is a directory with hot links to every one of them.

You will find all sorts of material here. There are simple explanations of the incredibly involved CATS scoring schemes and evidence that CATS has become less and less trustworthy over time. You’ll also find several videos that explore why CATS writing portfolios are a problem.

One You Tube covers a portion of the news conference the Bluegrass Institute hosted last fall on the governor’s illegal seizure of private Web domain names. A higher court in Kentucky just ruled that this seizure was indeed illegal and also took the rather remarkable step of blocking the lower court from taking any further action in the matter — a remarkable slap at the lower court.

Scam too big for New Jersey coming our way

New Jersey Gov. Jon Corzine met significant resistance from fellow Democrats in his state’s legislature over his plan to allow municipalities to underfund their pension plans and spend the money elsewhere.

Kentucky’s House of Representatives could vote on a similar bill this week.

The latest bit of advocacy journalism from the Louisville Courier Journal really just goes too far: 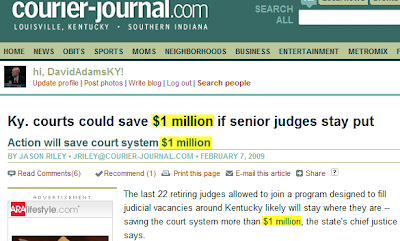 The thing about the $1 million in “savings” is that, regardless of how many times they repeat it, it is illusory. The Senior Status program forces taxpayers to overpay for judges who work part-time. All we are doing by keeping this program alive is running up future pension bills. With public employee benefits unfunded liability already well over $30 billion, this is exactly the wrong thing to be doing.

We’ve already played this smoke-and-mirrors routine with cities and counties. It seems pension illiteracy is the new black.

As Discussions About Dumping CATS Heat Up

Next year, that state’s school executive recently announced, the entire program will be revamped to save money and get scores back quicker.

Sounds like Washington already did some of that research that a few in Kentucky are trying to say still needs to be done.

As legislators in Frankfort round up support for tax increases to delay making government more affordable, the state bailout of city and county governments marches on.

House Bill 117, which would allow local governments to underfund their pension obligations in the tens of millions of dollars, passed the House State Government Committee overwhelmingly.

Last summer when legislators came to Frankfort for a special session to save the state from decades of reckless underfunding of public employee fringe benefits, they promised to stop underfunding them.

That was before the November elections which are now, of course, in the past. The media is, for the most part, not very helpful on this.

Heard Around Frankfort on Kentucky Education

ON THE NEED TO REEXAMINE KERA:

“It is also time for a thorough review of the Kentucky Education Reform Act.”

ON WHETHER CATS SCORES PARENTS GET FOR THEIR STUDENTS ARE REALLY TRUSTWORTHY:

“CATS is not valid and reliable for individual students. All students do not take the same test.”

“The (CATS) scorers that our contractor uses must have 60 hours of college credit in order to be a scorer.”

ON WHETHER KENTUCKY SHOULD USE OPEN-RESPONSE (ESSAY) TEST QUESTIONS

“According to the Center for Teaching and Learning, well designed multiple-choice tests are generally more valid and reliable – I’m quoting from them – than essay tests.”

ON MAKING MAJOR CHANGES TO THE STATE’S ASSESSMENT PROGRAM

“There’s momentum, and I think there’s a consensus that CATS needs to be sunset.”

ON WHAT TEACHERS ARE THINKING

“If I were going to paraphrase our members’ feelings, it would be that CATS testing needs a complete overhaul.”