Despite many invitations from the Bluegrass Institute to join with us in frank discussions about education issues, in the past the Prichard Committee for Academic Excellence always declined.

Now, Prichard has joining the Blogosphere.

That at last gives the public and the Bluegrass Institute a welcome opportunity to respectfully discuss Prichard’s ideas in an open forum. This can only lead to a better informed citizenry as we all get the opportunity to more fully understand some of the things Prichard is saying.

For example, we have some questions about Prichard’s first posts. Prichard talks about how well we reportedly do on National Assessment of Educational Progress science tests in the fourth and eighth grades but omits any discussion of how we do at the high school level.

The fact is, any Kentucky science advantage, if it exists at all in the lower grades, apparently evaporates in high school, as the following figure covering science testing conducted by the ACT, Incorporated shows. 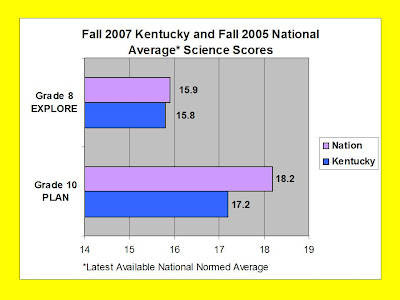 Prichard’s blog on the science scores also briefly crows about Kentucky NAEP scores in reading, math and writing. However, another initial Prichard blog post makes reference to a report titled, “MEASURING UP 2008, THE STATE REPORT CARD ON HIGHER EDUCATION.”

Page 5 of that report has this to say about Kentucky’s latest NAEP performance:

Somehow, that seems to put our NAEP results in a rather different perspective from the one Prichard conveys.

In any event, we welcome the Prichard Committee to the Blogosphere. We’re glad you finally joined us in an open forum that all can see and that you have asked the public for comments. We believe such open discussions are essential for a better informed public that will in turn lead to better education for our children.

Lexington Herald Leader columnist Larry Dale Keeling looks into the abyss of state government obligations and comes away with his faith in the status quo unshaken:

“Democrats spread the gospel of raising new revenue as a means of avoiding a “scorched earth” destiny for various state agencies and services.”

“Where this gospel is concerned, Republicans play the role of skeptical agnostics who think the revenue situation for the current fiscal year may not be as grim as the projections (from the independent Consensus Forecasting Group) suggest.”

“Reality probably lies somewhere between the two extremes, although closer to the D gospel than the R agnosticism. There will be a significant revenue shortfall this fiscal year, and most likely a bigger shortfall next year. And dealing with those shortfalls without additional revenue will require severe cuts in some state services.”

Agnosticism is generally defined as a belief that gaining knowledge of certain truths is impossible. It is used here by Keeling to connote a willful ignorance of reality. He applies this term, of course, to people who don’t want tax increases and prefer to trim government back to an affordable level rather than continuing the well-established trend of endless growth in spending.

At a time in which more people are starting to doubt Keynesian othodoxy just as government rent seekers pursue bailouts with missionary zeal, it’s funny to see local commentators clinging to the old religion.

Piecing together another government snafu

Kentuckian Dea Riley is a marketing executive who has helped organize and run major international sporting events including the 2002 Winter Olympics. She says the 2010 World Equestrian Games will fail to benefit Kentucky like it could have and will wind up costing taxpayers at a time when budgets are already strained.

“Kentucky has really botched the deal and the reason is the governments in charge of it –- they’re a year out and additional major sponsors have yet to sign up,” Riley said.

“One thing you learn about an event such as this is that everyone is in it together and the goal is everyone’s success,” Riley said. “It seems the right hand doesn’t know what the left hand is doing.”

The major opportunity provided by an event like the World Equestrian Games comes in the form of dollars from corporate sponsorships. Riley said the deal given to title sponsor Alltech, Inc. was possibly too generous and may have contributed to the lack of additional sponsors and caused great harm to the overall effort.

The World Equestrian Games are scheduled for September 25 through October 10, 2010.

Kentucky officials have messed around and messed around with the growing public employee fringe benefits disaster for decades, apparently hoping it would just go away.

Of course, it hasn’t.

The commonsense solution would involve properly funding growing obligations at the expense of other spending desires less critical to keeping the state solvent and with cutting future benefit obligations.

We are probably more inclined to do something like this, though:

But others aren’t so sure. 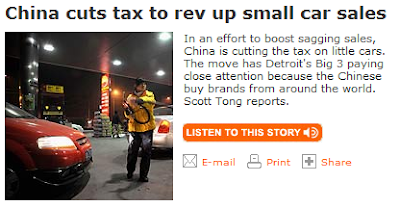 It really is amazing we are still having this conversation. I’m counting the days until our federal government uses our own money to prevent us from buying Chinese which would otherwise, I’m guessing, be big sellers.

Governor Beshear has approached President Barack Obama with his hands out for some stimulus action, and why not? He’s only doing what all but three other state governors are doing. Only Alaska governor Sarah Palin, Rick Perry of Texas, and South Carolina’s Mark Sanford have refused to ask for federal bailout funds for their states.

Some may think that Beshear might as well get some for us, since everyone else is doing it. They may even think that spreading all of this cash around is actually a good idea. I ask you to look at this from a different angle.

The American Recovery and Reinvestment Act is nothing more than the fattest ham ever smoked in Washington. In this bill there are earmarks that would make even the most fiscally irresponsible scratch their heads. $640 million dollars for new climate change computer modeling technology. Why would we need that? I thought climate change was a proven fact – what would be the justification for doing any more climate models? How many jobs will this create?

There’s $1 billion dollars for extra census surveys. How will it stimulate the economy to count ourselves over and over again?

There is $650 million more dollars for additional $40 coupons for the purchase of digital converter boxes for analog TVs. How will this stave off economic disaster?

$6 million dollars have been set aside for snow machines in Minnesota, and millions more for a Mob Museum in Las Vegas.

We must remember that government has nothing that it doesn’t first take away from us. This is not a stimulus package, but rather an economic tranquilizer gun. Imagine an even larger portion your future productivity being wiped out to pay for climate computers, senseless people counting and digital converter boxes. Better yet, imagine a portion of your children’s future wealth being ripped away from them before they even start to build it.

The American Recovery and Reinvestment act will “recover” more of your proceeds and “invest” them in a bloated, bureaucratic government, with arms too fat to reach over its own head.

Economists estimate that the combined cost of the bailout and upcoming stimulus packages will top 2.5 trillion dollars. Where will this money come from? The answer is frighteningly clear. Government has no ability to produce wealth, only the ability to take ours by force. Those of us who are already carrying the greatest share of the economic burden will be asked to shoulder even more.

There are pundits who will point to the $275 billion dollars in tax cuts in this behemoth spending bill. But Washington Democrats struck out the most important tax cut contained in the original legislation. Even President Barack Obama recognized that employers needed tax relief in order to prevent massive layoffs. But Nancy Pelosi and Harry Reid struck a per employee tax credit for businesses that hired new workers or avoided layoffs. Giving no explanation for this total failure in logic, they just took out their knife and started slashing. Perhaps they thought it would better stimulate the economy to spend that money on protecting the endangered nests of the Red Crested, Web footed Cave Willow?

While our governor gets in line with the rest of the beggars, remember that this stimulus is no stimulus at all. It is the greatest perpetration of theft on the American taxpayer in the history of our nation. As Congressman Ron Paul said, “we’re going down the road to nationalization, without even a whimper.” This stimulus package is in fact no stimulus at all, but an economic tranquilizer.