Politicians are fond of promising to run government “like a business,” only to toss the idea aside at the first sign of resistance from the bureaucracy. But Gov. Steve Beshear has taken the backtracking to a new level by treating a business opportunity like a government program.

Beshear has opted to scale back traditional Kentucky Derby activities rather than attempt to make lemonade out of lemons. Waddy, Kentucky businessman Brian Schenkenfelder offers this:

“The last few years my wife’s father has had a Derby Eve party in Frankfort that we attend. We have always spent the night and will get up early for the Derby Breakfast. Every year I am reminded of what a tremendous waste of $200,000 of tax payer money the event is. Even so, it garners a pretty big turnout every year as people come out of the woodworks to get their free breakfast of luke warm eggs, sausage, ham, grits, biscuit, and some juice or coffee. Even if the food is not the best, it is a fun event to attend. There is always a lot of people milling about checking out the crafts, listening to musicians perform, and watching different dancing groups put on exhibitions.”

“In good times the expense is barely justifiable, in bad times it doesn’t make any sense. Which is why Beshear is rightly trying to scale back the breakfast. I don’t have any problems with the need to save taxpayer money. But wouldn’t it have been easy to find some title sponsors to help offset most of the costs? I am sure some companies out there would like the opportunity to directly advertise to 20,000 plus people. Especially if they were given booths to promote their goods.”

“Instead of something sensible, Beshear has decided to charge for breakfast and remove the tent that it is traditionally held under. First off, who is going to show up and pay $3-$4 for a mass produced breakfast of mediocre food? Then be be left to eat out in the elements rain or shine. In addition, charging for each item will mean the normal long lines will become interminably long lines. It will take forever for cashiers to collect various amounts of money depending on what is on the person’s plate. Wouldn’t it have been easier and faster to charge a flat rate at the door and allow people to eat whatever they want?”

“Fortunately, no one will have to worry about long lines because no one will actually go to the breakfast. I know I don’t plan on paying for the breakfast. I suspect many others will have the same view. I suspect that turnout will be miserable for the event. Especially if the weather is poor. Seems to me that it would be better to just cancel the event than to hold the poorly thought out alternative that Beshear is offering.”

Maybe Beshear is setting the stage for another tax increase. It does kind of sound like the Washington Monument Strategy.

Kentucky continues to have problems with low public school graduation rates and related high dropout rates; however, many continue to underestimate the seriousness of the situation thanks to inaccurate data provided by the Kentucky Department of Education (KDE).

As discussions swirl around House Bill 189, which would raise the minimum school dropout age in Kentucky to 18, a new post over at the Bluegrass Politics Blog provides the latest evidence of the confusion being foisted on the public. That post cites bogus, overly optimistic KDE dropout rate statistics as though they are credible.

The facts are that the KDE’s statistics were audited by the Kentucky Auditor of Public Accounts in 2006 and found to significantly understate the true dropout situation.

Here is a better picture. 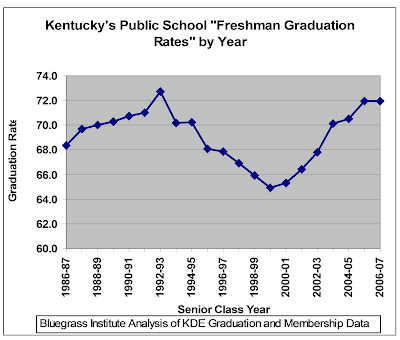 This graph, which is based on far more credible graduation rate calculations, shows that as of the 2006-07 school year, Kentucky’s public schools fail to graduate more than one in four students along with their peers. The graph also shows we have yet to fully recover from a long period of graduation rate decay that started after 1993 and ran until the year 2000.

Of course, the total flattening of progress in the 2006-07 school year isn’t particularly encouraging, either.

The “Freshman Graduation Rate” calculation used to create the graph has been extensively researched by the federal National Center for Education Statistics. Some of that research, reported here, examined the performance of various graduation rate formulas using data from two states where high quality student tracking systems provided high quality data. The “Freshman Graduation Rate” was the second most accurate formula examined, generally returning results about two points lower than the real figures in the two test states. Only one other formula worked slightly better, but that formula is more involved to use with available data from Kentucky. The error difference between the two formulas was quite small, in any event.

Whether HB 189 offers a good answer to Kentucky’s dropout situation is hotly contested. However, the dropout problem is much larger than many in this state want to admit, and we simply cannot afford to keep on losing so many students before graduation.

– Comparing ACT Scores to Participation in Public and Non-Public Schools

Feedback on my Bluegrass Blog post on “The Real ACT Deal” indicates I need to more extensively discuss the way participation on the ACT college entrance test varied in the public and other-than-public schools in Kentucky after 1993.

If you want to see how Kentucky’s education reform is related to dramatic shifts in performance of our kids in private and home schools, continue reading.

The Kentucky Education Association’s “Legislative Information” web page fails to even mention the one 2009 bill that would have the largest financial impact on state schools and the children they serve. A new Kentucky group hopes to remedy this oversight.

“We expect full opposition from the unions on this,” Milliman said. “It is clear that our commonwealth’s local school facilities are in crisis. We must explore all means to provide the best education to Kentucky’s children while lessening the budget burden placed on taxpayers.”

“We could build almost five schools for the price of four with this exemption,” Milliman said.

I’ve been pointing out for some time that to really understand what is happening under Kentucky’s public school education reform, you have to look at separated data for different student subgroups. That’s true whether we are talking about CATS, the ACT college entrance tests, or the National Assessment of Educational Progress. When you only look at overall average scores, you miss a whole lot of education problems.

Now, some of the posts over at the Prichard Committee’s Blog help make the same point.

For example, in “Kentucky low-income college participation (Ouch!)” Prichard indicates that when you look at college entrance statistics for Kentucky’s poor kids, the numbers don’t look good at all.

In “Students with disabilities disappear,” Prichard’s Susan Weston points out that we are losing a lot of learning disabled kids in our high school. They drop out in alarming numbers before graduation.

In “Achievement gaps by race” Prichard provides, “a painful snapshot of a major Kentucky failure. For our African-American students, we deliver less at every level than we do for our white students, and we are not getting them close to the 100/proficient level we ought to provide.”

That’s precisely the sort of thing we said about minority performance in our recent report on how blacks and whites perform in Jefferson County on the CATS math and reading tests and in high school graduation rates.

The problem here is quite straight-forward. You can’t see the kids being left behind in KERA by looking only at one, overall average score. That’s true whether we are talking about our CATS assessments or the other testing programs commonly used in Kentucky. To really understand what is happening and make real improvements, you need to look at disaggregated data – and hold schools accountable for that data – such as we are forced to do in some areas with No Child Left Behind.

– May not mean what you think!

– Do we want schools to test political opinions?

House Bill 508, the Kentucky House’s alternative to Senate Bill 1 to change our CATS assessments, requires the Kentucky Department of Education to consider international benchmarks when it revises the state’s public school education standards and tests.

That sounds like a good idea – after all, our kids now must be prepared to compete not just against kids in Ohio and Tennessee, but also against kids in China, India, Japan, and a host of other rapidly advancing countries.

PISA asks students whether they support several environmental policies and then creates an index of “responsibility for sustainable development” from the responses. Responses in favor of the policies are responsible; those opposed are not. That kind of questioning is inappropriate on a science assessment. Without serious reform, PISA is inappropriate for benchmarking. (Emphasis Added)

I seriously doubt that anyone – including even the Prichard Committee, which has directly called for international benchmarks – intends to create a test that does what the PISA tests do.

But, a lack of knowledge can lead to bad consequences. So, the people working on our CATS legislation need to be quite specific about exactly what part of the international community’s benchmarks we intend to emulate. Some of those international standards are completely unacceptable in a free society.