– May not mean what you think!

– Do we want schools to test political opinions?

House Bill 508, the Kentucky House’s alternative to Senate Bill 1 to change our CATS assessments, requires the Kentucky Department of Education to consider international benchmarks when it revises the state’s public school education standards and tests.

That sounds like a good idea – after all, our kids now must be prepared to compete not just against kids in Ohio and Tennessee, but also against kids in China, India, Japan, and a host of other rapidly advancing countries.

PISA asks students whether they support several environmental policies and then creates an index of “responsibility for sustainable development” from the responses. Responses in favor of the policies are responsible; those opposed are not. That kind of questioning is inappropriate on a science assessment. Without serious reform, PISA is inappropriate for benchmarking. (Emphasis Added)

I seriously doubt that anyone – including even the Prichard Committee, which has directly called for international benchmarks – intends to create a test that does what the PISA tests do.

But, a lack of knowledge can lead to bad consequences. So, the people working on our CATS legislation need to be quite specific about exactly what part of the international community’s benchmarks we intend to emulate. Some of those international standards are completely unacceptable in a free society.

Standing in line to rob the train

The Lexington Herald Leader got the press release from Gov. Steve Beshear announcing the arrival of $37 million in housing bailout money. And they even wrote an article!

But they missed the story.

The Kentucky Department for Local Government reports the money is already gone and applications for an additional $78 million will have to be turned away. What’s the world coming to when local governments and non-profits can’t get federal funding to buy up foreclosed houses?

Socialized InternetCare on the way

The U.S. Census Bureau reports that more than 2.6 million Kentuckians don’t have broadband internet access in their homes.

Quick, someone call the government!

Actually, it appears someone already has. And since only six states have a lower broadband penetration than Kentucky, expect Internetforeveryone.org to get here soon.

Internet Service Providers should probably get to work on their bailout packages right away.

Looking up to San Francisco

We have no such luck in Kentucky, of course, where politicos have long-since asserted their dominance with a combination of hubris, buffoonery, and dishonesty.

Back last August when the overall average ACT scores for all 2008 high school graduates came out, I cautioned that the overall scores might be impacted by the performance of students who didn’t attend public schools.

Finally, through the good offices of State Senator Jack Westwood (Thank You to this supporter of government transparency), I have obtained a data disk with 2008 ACT scores and participation numbers for all the public high schools in Kentucky. When this data is combined with the overall averages and participation numbers for the state, it is possible to determine how the public schools did separately from the performance of other-than-public-school graduates.

The graph tells the tale. 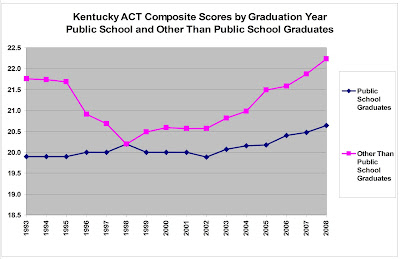 Times change. The greater flexibility in private and home school systems allowed these non-public alternatives to adjust to their vastly increased student load (which nearly doubled during the years covered in the figure), and the results since 1998 are obvious, and unmistakable.

Starting from the same point in 1998, Kentucky’s public school alternatives have significantly outperformed public schools on the ACT Composite.

Furthermore, because there are now notable numbers of Kentucky kids in other-than-public-school programs (which includes home schoolers), the non-public students’ much higher ACT averages pulled up the overall average score notably in 2008.

As the graph shows, by themselves, Kentucky’s public schools only increased their ACT composite by 0.4 points since 1998.

Stupid is as stupid subsidizes

Hard to miss the irony of this past week when a Kentucky Senate committee had a hearing on government spending transparency just as twin legislative secrecy bills were offered by the leaders of each chamber (here and here).

By the same token, our lawmakers seem increasingly determined to give taxpayer money to motion picture productions just as Wisconsin is trying to dump their movie subsidies program and Pennsylvania has figured out that they are losing $57 million a year on their scheme to bring Hollywood to the Keystone State.