Protecting ourselves into Obama’s poorhouse

President Barack Obama got his head handed to him Tuesday after he pulled out the old Herbert Hoover playbook and started talking about protecting American manufacturers against foreign competition.

He quickly learned that is just not how the world works any more: 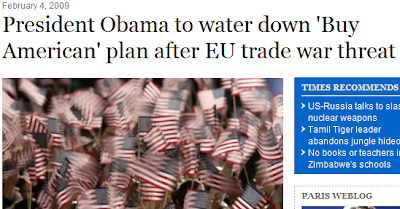 Free trade requires everyone to figure out what they each do best and then do it. In today’s global economy, attempting to fight the trend on international trade is always going to start a war we can’t win.

So it is interesting to see a Kentucky legislator trying to prevent the state from buying American or Kentucky flags overseas. In the bailout era, the quicker we figure out that mandating purchases for non-economic reasons is a bad idea, the faster we will be able to learn the lessons the world is trying to teach us.

Kentucky’s Math Swamp – About to Get Flood Control

It’s been a hot topic here in Kentucky and around the entire country – the public school math standards tend to be “a mile wide and an inch deep,” covering far too much material in far too superficial a manner. Now, at least one bill aims to drain our shallow math swamp and remake our math program into something powerful and free-flowing.

It’s been too long in coming, although answers to fix Kentucky’s math woes have been available for some time.

Following years of very sharp criticism, the National Council of Teachers of Mathematics changed their curriculum guidelines around the turn of this century and then about two years ago clarified what they really meant with a supplemental document called “Focal Points.”

The Focal Points document makes it clear that what a lot of us call “the basics” really are important and must be taught to mastery.

Then, early last year, the final report of the National Mathematics Advisory Panel (NMAP) came out. Interestingly, one of its key members was Skip Fennel, the past president of the NCTM, but there were also many other key math experts on board.

The upshot of all this new guidance is that we now know the KERA math fanatics were wrong about a lot of things.

First, kids need to know how to add, subtract, multiply and divide to the point where they can do it automatically. Calculators did not make those skills obsolete – instead these skills are a critical foundation for higher level math courses. Kids then need to really master fractions and some items from geometry.

Those earlier skills form the essential underpinning for the next step – learning algebra. The best, scientific research now makes it clear that algebra needs to be a major focal point, and other areas of math like statistics need to be deemphasized until algebra is mastered. Once kids understand the art and logic of algebra, they are then well-prepared to tackle some of the other important areas in math like trigonometry, advanced geometry, and statistics. Another KERA favored item called “spiraling,” where the same math topics were revisited year after year without kids ever gaining mastery of any topic is also discredited. When you try to cover too much material, spiraling is inevitable – but it doesn’t really teach kids enough math.

Anyway, the background research is done, and between the NCTM documents and the extensive and rather detailed information in the NMAP report, it shouldn’t take long to rework Kentucky’s math curriculum into something that will really work for kids. And, our continued high levels of math remediation in our colleges show this can’t come too soon.

It happens far too often. A researcher stumbles across data from the National Assessment of Educational Progress (which everyone calls the NAEP). Their simple analysis seems to make Kentucky’s public schools look good. The next thing you know – Kentuckians are treated to yet another claim that our public education system has risen from the bottom of the states to score near the middle on this federal testing program.

The latest example of this showed up recently in the Prichard Committee for Academic Excellence’s new blog. Prichard presents two graphs that show Kentucky now scores near, and sometimes even above, the national average on a variety of different NAEP assessments.

But do such simple analyses really give us an accurate picture? What happens, for example, if we look at disaggregated data for just our White kids? The table below shows how that looks for fourth grade NAEP mathematics. 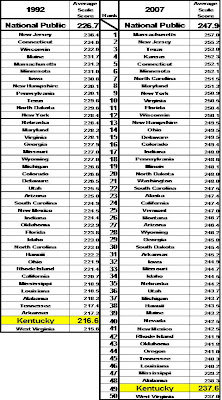 This clearly paints a very different picture. Our White students only outscored one state, West Virginia, back in 1992, when NAEP first gave a state-level fourth grade math assessment. In 2007, following years of expensive reform, our White kids – only outscored one state, West Virginia. Considering Kentucky’s student sample on the 2007 NAEP was 84 percent Whites, the fact that such a large portion of our students scored very poorly against their peers in other states raises strong questions about claims that Kentucky now performs near the national average.

To find out why the NAEP data for Kentucky looks so very different once scores are disaggregated, and to see scores for more races and subjects, including the serious NAEP math disappointment for our Black students, continue reading.

No KERA for Georgia?

A group of school districts in Georgia are trying to follow Kentucky’s school-funding example by suing the state for more money. But Georgia’s governor and attorney general say that it is illegal to use taxpayer money to sue the state: 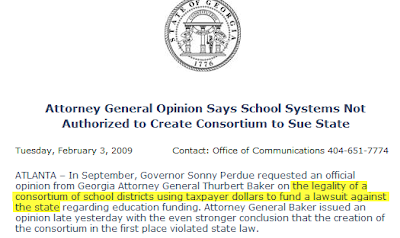 In a time of governments and government agencies cannibalizing each other for decreasing pools of money, this will be an interesting one to watch. The saga is far from over and the implications are wide-ranging.

And speaking of “efficient” Kentucky schools, did I mention that Kentucky’s terrible accounting system prevents anyone from knowing if our schools are operating efficiently or not?

What? Some good news brewing in Frankfort?

With all the runaway government spending and bailouts as far as the eye can see, it’s pretty easy for an active Kentucky citizen to get discouraged about the way things are going now. There may be some good news on the horizon, though.

House Democrats in Frankfort have held back spending transparency and Gov. Steve Beshear has run it around in circles, but it appears Senate Republicans are ready to make a move in favor of the people’s right to know where their money is going.

Just found out about a government transparency expert coming in from Virginia in the middle of this month to testify to the Senate State and Local Government Committee. I’m trying to track down details…

Another state looks at cutting back

Despite Kentucky’s fast-growing unfunded liability in its pension plans, a similar change is extremely unlikely as both House Democrats and Senate Republicans oppose the idea.

But as more legislators in more states look for ways to deal with unaffordable government, the idea of trimming unlimited growth of programs is going to keep coming around.

If nothing else, we have to get used to the idea of pouring a lot more money into our expensive benefits plans than we are used to. And delaying the inevitable really isn’t an option any longer.