Gov. Steve Beshear’s “Kentucky’s Open Door” web site remains closed to the public in terms of providing much useful information about where the state is spending our money.

Perhaps we should encourage Beshear to post the salaries of all state government employees to help get him started on the way to the transparency he has promised us so many times.

Do the right thing, Governor

Rather than use this one-time money to make government bigger — and thus, more unaffordable in the future — Kentucky Gov. Steve Beshear would be very well advised to make the same request.

That number is based on $3.1 billion in requests from the Kentucky Department of Education and a conservative estimate of 10.7% added to construction costs by the prevailing wage mandate.

On April 13, state Sen. Julian Carroll and Congressman Ben Chandler will be in to discuss the same thing.

Another interesting tidbit from the story is the claim, unattributed to anyone, that the spendulus will “create or save about 8,000 jobs in the sixth Congressional district.”

No word on how they are going to count those jobs.

So, let’s try to get this straight. If South Carolina Gov. Mark Sanford refuses $700 million in one-time money from the federal government, he would risk causing the loss of 4000 teachers’ jobs and 700 prison guards.

At least that is what this news story says: 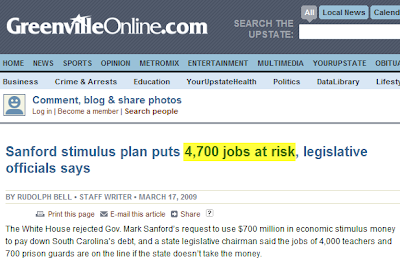 But if that is true, whose fault will it be next year without another $700 million gift plus $35 million in interest payments for this year’s $700 million?

Some Comments on the Demise of CATS

Readers are probably surprised that I didn’t jump out right away this past weekend with some sort of gloating Blog item about the passage of Senate Bill 1 last Friday. This bill will significantly revise and improve Kentucky’s public school assessment program, something I have recommended doing for some time.

Actually, I figured most of you know that the Bluegrass Institute did play a roll in this legislation. In fact, while not by name, we’ve basically been accused of that in several different liberal newspapers as David Adams points out in “These things always happen in threes” over at the Kentucky Progress Blog.

And, we did play a role, providing a huge amount of research and commentary on the CATS’ major failings, both by itself as the state assessment (find some links to some of that research here) and as the testing input to Kentucky’s NCLB program.

In any event, my focus isn’t on some prideful patting myself on the back, despite accusations of that elsewhere.

The important issue is to translate some pretty good provisions in SB-1 into really positive changes for Kentucky’s students. And, that may not be so easy to do.

We need to insure the new assessments are more resistant to the sort of inflation-to-make-educators-look-good problems that ultimately undermined CATS’ credibility.

That may be possible with a continuous comparison to other tests like the National Assessment of Educational Progress and nationally normed tests such as the ACT. SB-1 does not call for that safety check, but it does not prevent the Kentucky Board of Education from establishing an inflation watch program by regulation, either.

There are also potential pitfalls to avoid in some provisions in SB-1 such as the one to consider international benchmarks. Not all international tests are suitable.

This means some really smart and properly motivated people – including some of our very best teachers along with key college professors, parents and business leaders – now need to volunteer for the various committees that will be formed to review and revamp our “mile wide, inch deep” education standards. These people will need to look at the latest research with a careful eye, as education research in general isn’t in very good shape, as experts like Arthur Levine have pointed out.

It’s going to take some sharp people to separate the research wheat from the chaff.

The proper focus going forward also means that the legislature needs to keep a careful eye on the department of education as SB-1 is translated into actual policy. We found out in the past that the department is capable of going off on its own despite the provisions in law. The department dramatically proved that when it illegally dropped norm reference testing in elementary schools and when it consistently ignored a provision to create a longitudinal assessment to track student performance over time. That provision was in the 1998 legislation that created CATS, by the way. It’s a decade later, and it never happened.

Hopefully, with a new commissioner of education coming on board sometime in the next few months and with many other entrenched personnel now retired or moved on from the education department, this issue will not be as large a problem as in the past, but history tells me we can’t assume that will happen.

So, am I pleased that CATS is being replaced? Absolutely! But, am I keeping my eyes wide open so that we don’t wind up, as we did when CATS replaced KIRIS after 1998, with an assessment program that still doesn’t do the job? You bet!