Bailing out the states, take two

While much attention has been paid to Kentucky’s revenue “shortfall,” little has been focused on overspending, and even less on debt and mounting future obligations, California continues to provide a glimpse of fiscal ruination yet to come. 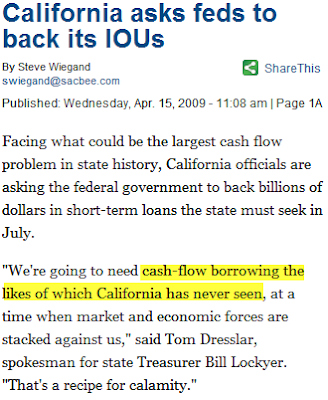 President Barack Obama probably has his “we have no choice” speech ready to roll for California. Kentucky’s big spenders are watching and being incentivized.

The special sessions we need

Speculation about a General Assembly special session being called in June has been running rampant for weeks. The conventional wisdom is that the House and Senate will agree with Gov. Steve Beshear about a new package of tax increases and run back in town for a week of ridiculous speeches.

Affirming votes and collective backslapping will ensue. And real, positive change will be pushed off to another day. Again.

Instead, we need a special session to fix the MUNIS system. Or to better manage labor cost policies. Or to really address public employee benefits. Or to disincentivize dependency on government.

Forcing government transparency would be worth a week of legislative meetings. Heck, we might even get our promised efficiency study if we got our elected representatives to consider the long-term health of the state rather than the short-term health of their political careers.

Was there ever really a doubt?

Shocking news: the Obama Administration decided it was okay to allow Gov. Steve Beshear to go ahead and break Kentucky law to dig us deeper into our fiscal hole by extending unemployment benefits. 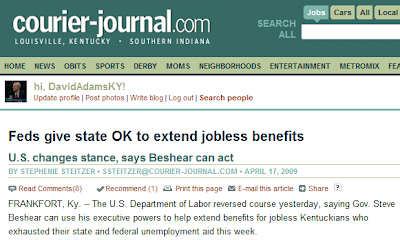 Does anyone still need to know why the taxpayer rallies are picking up steam?

I will be on the Kruser radio program in Lexington (590 AM WVLK) at 2 p.m. talking about the Bluegrass Tax Liberation Day.

Faced with an underfunding problem of more than $30 billion, Kentucky Retirement Systems has a new entry on their web site suggesting that what they really want for Christmas is a federal bailout.

Gov. Steve Beshear should have followed the example of South Carolina Gov. Mark Sanford, who agreed to take the current “stimulus” money only if he could apply some of it toward his state’s pension debt.

Tax competition the next domino to fall

What do you get when you take Kentucky’s questionable projected budget “shortfall” number, double it, and combine it with an international effort to make the United States tax code even less competitive in the world?

The fake idea that tax competitiveness between nations is costing Kentuckians $915 million a year. It’s just a matter of time before the idea low-tax nations will have to be punished because of their low taxes.

It’s just a matter of time before this ruinous tax increase strategy gains currency (pun intended) with more than just a few big-government fans and winds up taking a bite out of all of us.

Tax code manipulation is a very powerful tool in the hands of politicians. When you hear them talk about eliminating “tax havens,” rest assured that they will be coming after us soon enough.

Here is a good primer.