No, I’m not talking about stimulus money here. I’m talking about parents forced to go to rather extreme costs to “bail out” of a terribly under-performing school system – even if it means moving.

Such a “bailout” has been going on for years in Covington, Kentucky, home of the state’s worst performing school district. So many families have left that it’s now reported Covington may have to close several schools.

The Bluegrass Institute’s disappointment with the Covington Independent School System is no secret. We’ve written quite a lot about Kentucky’s lowest performing district on a number of occasions in places like here and here and here and here.

Obviously, we are not the only ones who are disappointed. But, isn’t it sad that Covington parents have to move to find decent schools. Why don’t they have good school alternatives right in Covington? Those alternatives could include some good charter schools – an alternative that is working elsewhere and that might finally spur Covington’s regular public schools into doing something effective to stem the loss of 1,000 students over the past decade – right in the middle of one of the fastest growing regions in the state.

Of course – looking on the bright side – when we finally get a serious charter school law in Kentucky, Covington will have empty real-estate available where we could set some up. Given Covington’s long history of poor performance, it would be a wonderful candidate for a charter.

Incentivizing ourselves in circles

In the last few hours, California and Wisconsin have joined the parade of states raising taxes during a recession.

If making government bigger really got us out of recessions, we wouldn’t be in one, would we?

Meanwhile, Sen. Kathy Stein weighs in on government incentives (from the Kentucky Kernel):

“Stein, who held a seat in the House for the 75th district for 12 years, said one of her biggest accomplishments during that time was her involvement with the Kentucky Children’s Health Insurance Program (KCHIP).”
…
“”We need to realize that unless we fund education, particularly higher education, Kentucky families can’t afford college education,” she said. “We are discouraging people from behavior that we want by the legislature not supporting needs of the university.””

“Stein said she has worked closely with Todd with university issues, and she thinks he has done “an excellent job under the circumstances.””

“One of Stein’s goals is to move Kentucky away from being a state of lung cancer, heart disease and diabetes. She said studies show the best way to curve cigarette and tobacco use is by a higher taxation rate.”

So let me get this straight: Stein wants to throw more money at college “affordability,” a stategy that has spurred massive higher education inflation in Kentucky, and wants to raise cigarette taxes (and spend more on government health insurance) to incentivize better health habits.

This is very similar to the reasoning that now has the federal government bailing out bad mortgages after years of forcing banks to make high risk loans.

Who is still standing in Frankfort?

Only eleven members of the Kentucky House of Representatives last week voted against tax increases, raiding the health insurance trust fund, and allowing counties to underfund the same fund. They are:

The county underfunding bill hasn’t hit the Senate yet, but only Sen. Katie Stine is still standing in that chamber.

CATS Changes May Be Nearer

Here’s the latest on the bill to change CATS testing from the Courier-Journal.

What’s new here is that Representative Harry Moberly now seems willing to completely remove the writing portfolios from the assessment. Instead, these would be used as instructional tools with their use monitored by Frankfort (a plan we have supported for some time).

That’s a position change for Moberly. During hearings at the Kentucky Department of Education’s Assessment and Accountability Task Force last year, Moberly at one point bemoaned removing portfolios from CATS. Apparently, Moberly has now seen and heard enough to finally see that a portfolio change is in Kentucky’s best interests.

You can see how using portfolios in CATS ties our writing teachers’ hands by watching this video.

Maybe Representative Moberly has seen it, too.

This is embarrassing. Can’t imagine why Lexington Mayor Jim Newberry’s political “folks” thought it would be a good idea for him to go on Fox News and call astroturf soccer fields “infrastructure,” but that is what he did.

The media opportunity wasn’t exactly an efficient use of public resources, Mr. Newberry. Hope your three minutes in the spotlight was fun.

Go here to see for yourself.

I haven’t spent much time looking at how the educational achievement of Kentucky’s poor kids compare to poor kids in other states.

For one thing, the data on poor student performance isn’t as extensive as I’d like. The National Assessment of Educational Progress (NAEP) does list separate state scores for students eligible for the federal school lunch program – the usual proxy for student poverty in education studies – but only since 1996 or 1998, depending upon the academic subject.

Because NAEP didn’t report the information before 1996, until recently there wasn’t much of a NAEP trend line for poor students to study. In education a trend line is normally far more revealing than single point-in-time data. Despite these issues, Susan Weston at the Prichard Committee just posted a Blog on “Student performance and low family income,” so, I decided to take a look at how Kentucky’s poor students rank against poor students in other parts of the country. The graph below shows what I found. 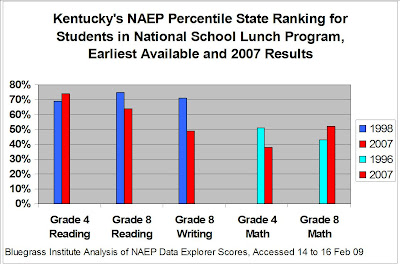 This graph shows Kentucky’s rank among the states in various assessments in percentile format. Percentile reporting is necessary because all 50 states didn’t participate in all of the NAEP assessments. For example, in Grade 4 NAEP Reading in 1998, 39 states participated and Kentucky’s poor students ranked 12th, outscoring poor kids in 27 other states. So, Kentucky outscored 27/39, or 69 percent of the states that participated. Our poor kids’ performance increased slightly in 2007 when the state outscored poor kids in 37 of the 50 states that participated in that assessment, achieving a 74 percentile score.

Unfortunately, NAEP Grade 4 Reading provides one of only two positive trends for Kentucky in the NAEP results shown in the graph. In sharp contrast, our poor students lost notable ground compared to other states in NAEP Grade 8 Reading, Grade 8 Writing, and Grade 4 Math.

Also notice that for as far back as the NAEP reports the data, Kentucky’s poor students perform around, or even above, the state median (the 50th percentile). The existing trends tend to imply that our poor students probably did not score anywhere near the bottom of the states when KERA was enacted, though completely conclusive evidence about that simply isn’t available.

Certainly, when we look at NAEP changes over time for Kentucky’s poor kids, the picture painted is quite different from the one Ms. Weston creates.

Again, I caution that the rankings shown here probably have some error due to variations in exclusion and accommodation rates, and because the other states experienced some pretty dramatic demographic shifts in student populations over time. Unfortunately, because the NAEP does not separately provide information on those issues for students in the federal lunch program, there is no way to really gauge the possible impacts. However, if the overall exclusion, accommodation, and demographic data for all students in Kentucky are reflected in the poor student population, then the rankings shown in the graph above are too high.