Beware of the scary taxpayer!

This hasn’t been a good year for government transparency.

While President Barack Obama was showing us he didn’t really mean it when he said the public would be given five days to view and comment on bills before he signed them, Kentucky’s House Speaker Greg Stumbo and Budget Chairman Rick Rand have bottled up a bill that would give just one day for us to view revenue and spending bills.

What are these guys afraid of?

Eight months into the state’s fiscal year, Kentucky’s General Fund revenues are up $408,496 according to State Budget Director Mary Lassiter, suggesting overspending is still at the heart of any “shortfall.”

Looks like we raised taxes and raided the Health Fund just in time.

Since Gov. Steve Beshear apparently isn’t going to do the “efficiency study” he promised, and the legislature doesn’t want to do anything about prevailing wage or MUNIS, perhaps we should focus on smoking, drinking, and losing money on the lottery.

Senate Bill 130 from the 2006 regular legislative session instituted testing with tests created by the ACT, Incorporated in grades 8, 10 and 11. Now, the Paducah Sun reports (Subscription required), that legislation is having positive effects on students and their higher education planning.

The Sun says Kentucky students now are starting to plan for college as early as middle school. This is a notable change from the historical trend where most Kentucky students didn’t start to think about higher education until their Junior year in high school.

The Sun article points out that today students take the ACT’s EXPLORE test in eighth grade and indicates that this helps students plan their high school years more effectively.

This is good news for all of Kentucky, as the new economy makes higher education virtually essential to earning a decent standard of living.

Even the President Understands the School Dropout Problem

The Associated Press (AP) reports President Obama will express deep concerns about the nation’s public school dropout rates in a major speech on Tuesday at the U.S. Hispanic Chamber of Commerce.

Per the AP, the president is not planning to offer any new legislation, and he will not propose disbanding the Bush administration’s No Child Left Behind law. The news service indicates the speech will add to earlier Obama administration comments in support of the charter school movement.

A news story about an unsecured traveling bear show endangering middle school students in Corbin, KY (yes, really) was almost as absurd as the following passage in The New York Times about the bailout billions soon to be swallowed whole by our school systems:

Kentucky’s education bureaucracy has demonstrated an ability to spend money quickly. But showing results and keeping track of the money? Now, that’s funny…

New Report on Vouchers – They Improve Public Schools, too

A new report from the Friedman Foundation indicates that in 16 of 17 empirical studies on vouchers, the public schools also saw improvements. 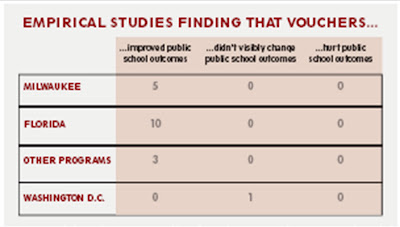 (From: “A Win-Win Solution: The Empirical Evidence on How Vouchers Improve Public Schools”
(Note: A total of 17 studies are represented here; figures do not sum to 17 because some studies include findings on more than one program.)

The only study that showed no difference was for Washington, DC, where the voucher program includes rules that largely eliminate the potential competition aspects of vouchers for public schools.