– At least in South Dakota

Judge Lori Wilbur is raising lots of eyebrows up in South Dakota with her recent ruling concerning a school funding gambit much like the 1989 lawsuit that brought KERA to Kentucky.

In South Dakota, it looks like at least one judge understands the restrictions on what the judiciary can, and cannot tell the legislature to do with tax dollars. It’s a separation of powers issue – one that probably got violated here in Kentucky in 1989.

Judge Wilbur also understands the conflict of interest when public school superintendents use taxpayer money to sue the taxpayers’ representatives in state courts. South Dakotans are incensed by the million dollar waste this has caused to date.

The article is an interesting “read,” made more so by the fact that South Dakota’s education system already outperforms most other states, yet still wants more money.

Can’t keep this secret any more

The first step toward fixing any problem is defining what has actually gone wrong. In Kentucky, it seems very unlikely we will fix our government overspending problem with tax increases, gimmicks, and raiding other funds.

And now the Wall Street Journal is showing everyone what we have been talking about.

A map in Monday’s WSJ shows Kentucky as one of only fifteen states with increasing revenues. An accompanying chart shows the rate of increase higher than all but seven states. 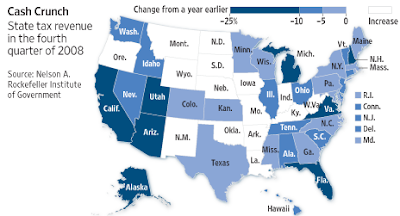 I will be on a conference call Monday with former presidential candidate Mitt Romney discussing card check legislation.

If there are any questions you’d like me to ask, please pass them along.

Interesting report from The Tax Foundation about a new Arkansas law that lowers the state’s cigarette excise tax in towns bordering other states with lower tax rates. The idea is to eliminate travelling over state lines to pay less in taxes for cigarettes.

What will be really interesting to see is what happens when retailers in the next layer of towns who will get to watch their customers leave town — but not the state, which is illegal — to buy cheaper smokes.

Kentucky legislators wouldn’t fall into a trap like this which might actually generate lower tax revenues and lead to less spending. It’s too bad. Now that we have raised our cigarette tax above that of Missouri, West Virginia, and Virginia, we would be a great candidate to follow Arkansas on this one and save a few Kentucky businesses.

During a debate in Texas over proposals to offer scholarships to learning-disabled children, the contrast between those who understand that schools, districts and education systems were made for children – not children for the system – could not have been starker. Note the distinction in responses to the proposals:

Real leaders like Houston Rep. Dan Patrick pounded their desks (literally) and ask: “What about just doing the right thing” for children?

However, bureaucrats blather about money and try to pit groups against one another. They whine about anything but the kids, as demonstrated by the response of Craig Tounget with the Texas Coalition of Public Schools: “We don’t want the public funds coming out of the public school system.”

But at least they’re having the debate in Texas. In Kentucky, the politicians in charge of the House Education Committee won’t even give school choice for the learning disabled a hearing, despite research conducted for the Bluegrass Institute by Pacific Research Institute’s Vicki E. Murray, Ph.D. — one of the foremost authorities on special-needs scholarships in the country.

Who will “pound the desk” for the children in Frankfort during the 2010 legislative session?

State revenues up in March

Reality has blown another hole in the “if we don’t raise taxes and raid other funds, we are all going to starve” game Frankfort pulled on us two months ago.

General Fund revenue numbers came in $169,716 higher last month than they did for the same period in 2008. Through nine months of the current fiscal year, General Fund receipts are $578,213 higher than they were at the same time in 2008.