The Bluegrass Institute is proud to join him and supports the effort as a sponsor.

What we hope to accomplish is to show our elected officials in Lexington, Frankfort, and Washington D.C. that the American fighting spirit will burn longer than their cockamamie programs and backroom political deals. They need us more than we need them and we say enough is enough. Our battle will not be won until government of, by, and for the people is run openly, honestly, and affordably.

42% of Kentuckians from another planet

Amid all the mess in the 2009 General Assembly, from tax increases and the raid of the Health Fund to the failure of prevailing wage reform and government transparency bills (here and here), a recent Kentucky survey suggests widespread awareness of Frankfort’s shenanigans.

Americans for Prosperity surveyed 600 Kentuckians and found 58 percent were dissatisfied with the legislature’s handling of tax and budget issues. The survey was taken January 22-27, before the tax hikes and the $50 million health fund raid.

The survey also found 49% of respondents viewed wasteful spending on programs that don’t work to be the most important issue in state budgeting, according to an AFP press release.

Repealing CATS testing, of course, helps some on that front.

More on the survey here.

If we had greater transparency in Kentucky, we would see something like this:

Kentucky’s latest retirement plan data was dated June 30, came out at the end of 2008, and showed nearly a $30 billion underfunding. After the stock market crash, it’s obviously much worse than that. The market may well bounce back at some point, but too many people in Frankfort don’t want you paying much attention to how much pain Kentucky taxpayers will face as these bills come due.

Thanks to Jack Dean at pensiontsunami.com for passing along the Texas story.

No, it’s the taxpayers

More Kentuckians would understand the damage to taxpayers coming our way as a result of public employee fringe benefits underfunding if the media did even a halfway decent job of covering the issue. 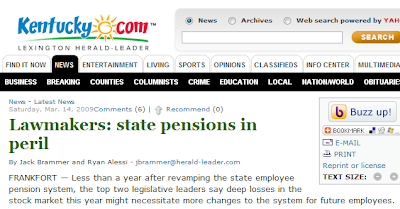 The pension plans are not in peril because the state can’t get out of making payments. Lower benefits for future employees will help some, but the key is pouring a lot more money into the plans as soon as possible to start dealing with the $30 billion underfunding of the plans.

A special session bill would have merely slowed the rate of underfunding growth, contrary to the assertion repeated by the Herald Leader that there was a commitment to “fully fund” the plans in 20 years.

And that puts taxpayers in peril.

The editors at the Louisville Courier Journal get pretty verbose when they are upset. Friday, they got upset at the Bluegrass Institute to helping discredit the dishonest and thoroughly manipulated Commonwealth Accountability Testing System, which was repealed by the legislature today.

Here is what they said about us:

Private school vouchers wouldn’t be such a strong idea if education bureaucrats did their jobs instead of focusing on wrapping themselves up in politically powerful fortresses.

Truth is, Frankfort Republicans and The Bluegrass Institute couldn’t have done it without the overreaching efforts of the school bureaucracy, their friends at The Prichard Committee, and the editorial board of the Louisville Courier Journal.

Putting something together that better serves students actually won’t be that difficult at all.

– Now we can cover the good news

Now that the department of education’s fabricated-national-scores-that-don’t-exist are under control, we can finally cover some good news about PLAN and EXPLORE in an objective and realistic manner.

These are the corrected scoring tables from the department. 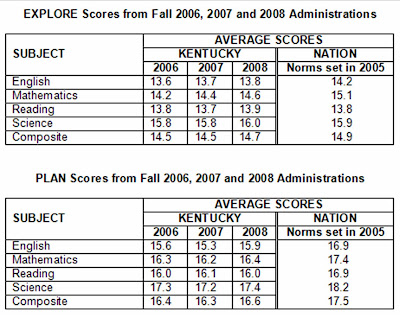 Notice the bogus and non-existent national average data for 2006 through 2008 have been replaced by the one true set of national data, which is for a single national sample taken by the ACT, Incorporated back in 2005.

ACT, Incorporated creates the EXPLORE used by our eighth graders and PLAN taken by our tenth grade students each fall.

Last year we were concerned when the high school PLAN results generally dropped, except for reading. That was unexpected, as normally test scores tend to rise in the second year after a new test is introduced. Were schools refusing to pay attention to PLAN because of the conflicting demands of the CATS assessments?

However, I am happy to report the high school losses on PLAN in 2007 were recouped in 2008, and we even moved ahead of the 2006 PLAN scores in English, Math, Science and the Composite score.

The middle schools continued a general trend of improvement, as well.

This is good news, as it shows our schools are transitioning to teaching the things that kids need to do well in postsecondary education. This small trend is particularly noteworthy because the CATS assessments – as abundant recent testimony in Frankfort has made clear – are not well aligned with college needs. However, schools still had to cope with the CATS distractions during the 2006 to 2008 time frame.

If the pending legislative changes to Kentucky’s assessment stay about the way they looked on Wednesday, the distractions of CATS will shortly be no more. The new assessment is going to retain the EXPLORE and PLAN tests, and the revised program is going to finally become aligned with what postsecondary education requires for all grades, as well. That should help boost our EXPLORE and PLAN performance a lot.

We cannot forget some important facts, however. The only national comparison scores for EXPLORE and PLAN are from 2005. We don’t know how the rest of the nation might have performed since. So, because our kids in 2008 still score behind where the rest of the nation was back in 2005 – especially so in high school – we clearly have a lot of work ahead of us.

So, I look for more advances on the EXPLORE and PLAN in the future. We badly need that if a reasonable proportion of our children are to be adequately prepared for life in an increasingly competitive international economy. But, after the heart-stopper set of scores on PLAN in 2007, it looks like things are now running in the right direction. The key, once the CATS distraction is gone, will be to move out smartly, and faster than education programs elsewhere.