What, no government Christmas?

Reports are coming in from all over the country about state and local governments cutting back on holiday celebration expenditures such as July 4th fireworks and Christmas lights.

The shame of it is that it took so long. So many years of wasteful spending practices, debt build up, tax increases, and creative financing before we started questioning why we need to spend money we don’t have for public holdiday celebrations.

Kentucky governments at every level should embrace a new austerity by making a point of cutting way back on expenditures for holiday observances. And then keep it that way.

Enjoying the Spirit of Christmas Yet to Come will be so much sweeter when it no longer means going further into hock.

TaxAnalysts.com has picked up on the possibility of Kentucky eliminating the taxation of income for a more transparent sales tax.

Given that the alternative proposed reform is Rep. Jim Wayne’s massive tax increases, we can only hope someone who is more concerned about taxpayers than building big government can get the attention of Gov. Steve Beshear, House Speaker Greg Stumbo, and Senate President David Williams.

Someone might point out to them that our neighboring states seem to be getting with the program, which makes it that much more important that we don’t fool around too much longer.

People who don’t have the legal right to protect themselves by possessing a firearm may not value that freedom until it is too late. Similarly, it is difficult for us to understand that those who don’t live where they can speak freely or come and go as they please may not even fully comprehend something we take for granted.

Just such a disconnect shows up every time an application for funding of school choice options is denied in a state that has opened the door to school choice options. North Carolina has. In Kentucky, though, we can’t really relate to the disappointment felt by reading a story like this: 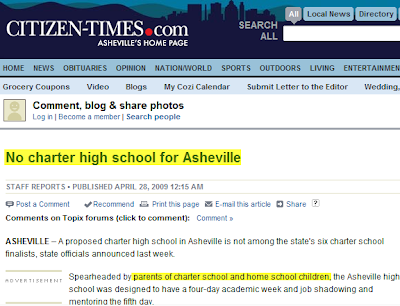 The only people in Kentucky who know what this feels like are those who pay extra for private school or home school. The rest of us have grown accustomed to being manipulated by state education officials.

Thanks to Michael Moore at the John Locke Foundation for pointing out the article.

Gov. Steve Beshear kicked off his big cardboard check tour today in Richmond with $1,268,933 for the city to buy up dilapidated houses and sell or rent them to low income families. In all, he will deliver $37.4 million in federal Neighborhood Stabilization Fund grants to local governments to manipulate housing markets.

Beshear said the money will “benefit communities by returning vacant lots to productive use while providing new opportunities for homeownership to deserving families.”

A press release from the Governor’s Office said: “Once the city has purchased and made any necessary repairs to foreclosed homes, families with a household income not exceeding 120 percent of the area median income may buy or, in some cases, rent the home at a reduced rate.”

Good thing we’re using that money to make politicians look good and to expand government functions rather than paying down any of our massive debt.

Getting a Better Picture from the NAEP

– Why you can’t ignore racial demographics

Over at the Prichard Committee’s Blog they have been busy posting all sorts of test results from the National Assessment of Educational Progress. Unfortunately, there is a consistent flaw in that effort – Prichard never tells its readers about the cautions in recent NAEP documents outlining how different exclusion rates, testing accommodation rates, and racial demographics can impact comparisons between Kentucky and the nation and other states.

You can find information about that in the “Pitfalls in Interpreting NAEP Scores” section of our freedomkentucky.org discussion of the NAEP, but here is a brief example of how the strong demographic advantages that Kentucky enjoys in NAEP can inflate impressions of how our public school system really performs. We use data from Kentucky’s top NAEP performance area – science. 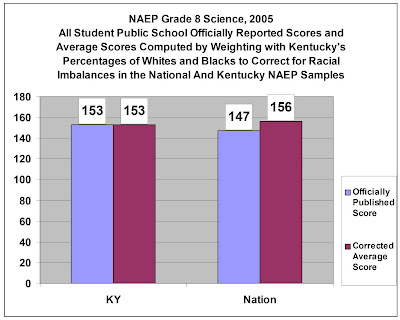 The officially published NAEP Grade 8 Science average scores for Kentucky and the nation for all students in 2005, shown by the blue bars, were 153 and 147 respectively. That indicates Kentucky is doing a good job teaching science compared to the national norm.

However, once we start to consider the very strong differences in the demographic makeup of the student group in Kentucky and across the nation, that impression flip-flops in a hurry. After adjusting the national scores to the same racial demographics that we have in Kentucky, all of a sudden Kentucky winds up three points behind rather than six points ahead of the national average, as shown by the dark red bars.

So, is Kentucky’s science performance really all that great, or is this just a case of us getting an unfair advantage on NAEP because our state simply does not have the racial makeup that exists elsewhere?

And, is it fair to not even mention that possibility when even the latest NAEP reports say you have to consider demographic factors?

If you want to learn how I corrected the scores for racial differences, read on.

California’s next big idea is to borrow $5 billion from future state lottery revenues and spend it all as fast as possible. The Los Angeles Times is on board. 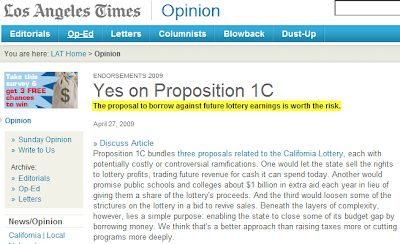 Not only is this similar to Kentucky’s big ideas of cleaning out the Rainy Day Fund this year and next year and raiding the Health Fund, it is probably something Frankfort’s spend-happy crowd will try whether or not our western friends pull off their scheme by passing Prop. 1C in the May 19 election.

Given the way government keeps growing all over, the scrounging for new revenues to spend in Kentucky won’t slow down any time soon. Getting our legislators to turn away from this type of madness will only happen if active, aware taxpayers stay plugged in and continue to grow their numbers and amplify their voice.