Click on this link and take a copy the Hamilton, Ohio spending transparency resolution to your local city and/or county officials.

Please report back on your efforts and your results.

What Honest Dropout and Graduation Rates Tell Us

Two years ago, California’s public education system began to get honest high school graduation and dropout data after switching to a high quality student tracking system. Two days ago, the state got its second set of trustworthy data, and it showed that only 68 percent of California’s students graduate with each class and an alarming one out of five – yes, 20 percent – drop out of high school each year.

Meanwhile, here in Kentucky, our state education establishment continues to feed us exaggerated claims about how many kids graduate from Kentucky’s public schools. Part of the problem is that while the huge state of California has managed to implement a good student tracking system, here in Kentucky our program has gone through a number of fits and starts and is still several years away from being able to provide what California started getting two years ago.

What makes this more unacceptable is that we could be getting a more accurate graduation rate figure from a decent estimation formula while we wait for our student tracking program to become fully operational. That formula was extensively researched by the US Department of Education several years ago and is called the “Averaged Freshman Graduation Rate” (AFGR).

The latest available AFGR are in Table 106 in the Digest of Education Statistics 2008 and cover the 2005-2006 school term. For California, the AFGR was 69.2, which is a point or two higher than the rate California just reported for two years later (federal research shows the AFGR tends to return a slightly high rate).

Kentucky’s 2005-06 AFGR was 77.2, and that is probably a point or two higher than the true graduation rate. However, the graduation rate Kentucky officially reported for No Child Left Behind purposes was notably higher at 83.26 percent (see Page 16 in the latest Kentucky Nonacademic Data Report).

Thus, Kentuckians are being fed a picture that is probably about 8 points better than the truth. We are talking about somewhere around 3,000 students – every year – who don’t graduate even though our educators are misleading us into thinking they do.

Anyway, we won’t know anything for sure about graduation rates in Kentucky for several more years at least.

Out in California, they know the truth now.

Louisville fries itself in Davis-Bacon grease

Louisville taxpayers will soon be overpaying for more public construction projects. Not exactly the best timing for paying off labor unions, is it? 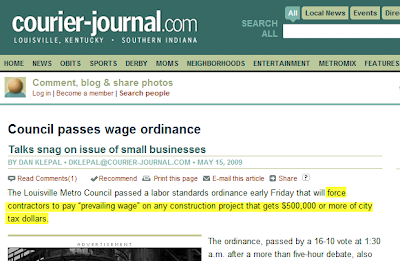 – Wall Street Journal Op-Ed ‘Gets’ It

Echoing a local problem that repeats itself across the nation, a Wall Street Journal article points to a sharp difference in the actions of public sector and private sector unions in this country.

Private sector unions recognize what is going on with the economy and are taking steps along with their employers to adjust to the harsh realities of the current situation.

I know of at least one case here in Kentucky where one of the state’s major aviation employers and their union are collectively looking at all sorts of imaginative ways to preserve jobs for those who need them while doing things like setting up early retirement and other options for those who might choose to use those plans.

However, today things are different, as the recent failure of many school-related tax issues in Ohio shows. Public sector demands for more money in our faltering economy are meeting increased resistance.

The laws of economics bow to no-one. Before the public sector bankrupts the private sector, I would expect the private sector to finally wake up. In fact, the recent movement of Tea Parties and failed tax referendums show that awakening is already under way.

It’s time for public sector unions to come to grips with what is happening across the country. They need to step up to the plate and join their private sector counterparts in shouldering their share of the pain to get us through the current fiscal mess. Otherwise, as the old saying goes, what goes around, comes around, and when the rest of us grow tired of suffering alone, the backlash against public sector unions might be very sharp indeed.

As the Obama administration and congress try to undo the highly popular Washington, DC school voucher program, they are getting push back from a surprising source – the liberally oriented Washington Post.

Check the article for comments about how the DC voucher program has produced better reading results.

In a surprise move, the Kentucky Board of Education is bringing Mr. Kevin Noland, the former Kentucky Department of Education chief legal counsel, out of retirement to serve as Interim Commissioner Of Education.

Mr. Noland served as interim commissioner several times before and therefore won’t face much of a learning curve for many of the required duties.

However, Mr. Noland takes over, albeit for what should be a short period of time, at a critical point where modern education reform plans in the recently enacted Senate Bill 1 are in the early stages of implementation.

This could be a real challenge because Mr. Noland is part of the “old guard” at the Kentucky Department of Education. He spent much of his career staunchly defending many now discredited ideas that date from the early days of KERA. So, it will be interesting to see how well Kentucky’s new interim commissioner adjusts to the changes in Senate Bill 1 – changes that definitely move us out well beyond the decades out of touch education philosophies that Mr. Noland historically defended.