– But, we do deserve better facts

Several days ago, California voters rejected further hikes in school taxes. Considering the especially severe economic situation out there, with things like house values and overall personal wealth plummeting, that isn’t hard to understand – unless you are an educator – even the nation’s leading educator.

In a May 22 news release, the US Secretary of Education gets on California’s case for turning down the tax increase.

In a recent speech, the secretary told Californians, “Your state once had the best education system in the country. From cradle to career, you took care of your children.”

This is a politically appealing assertion, but I don’t think the facts support it. Since the first days of state testing from the National Assessment of Educational Progress (NAEP) in the early 1990s, California has never ranked at the top. In fact, California’s official NAEP scores generally rank about dead last. Even after making corrections for strong shifts in student demographics in the state (which official reports don’t do – it’s something I and a few other researchers are looking at), I don’t see how anyone can claim California’s educational system was the best, at least over the past two decades.

So, we need better, fact-based presentations instead of politically attractive assertions from Washington. That’s the way good policies will be implemented.

And, somehow, Washington needs to start listening to the fact-based signals we are sending them – the public is on its financial back, and right now a tax increase is the last thing we need.

Care and feeding of a North Carolina billionaire

Business Week magazine has an article about ten of the wealthiest people in America. On this list is a North Carolina man some in Frankfort still want to make a massive recipient of Kentucky’s corporate welfare dollars.

Supporters of expanded casino gambling were for a constitutional amendment before they were against it.

It’s an area where Kentucky has a long way to go. Do you know how much your school district spends on your own child’s bus route compared to other routes? How about the cost to heat your child’s school versus that of other schools in the district? Elsewhere in Kentucky?

These are the sorts of questions asked in “Democratize School Budget Data” (subscription may be required) in this week’s Education Week newspaper.

What makes this interesting is that Ed Week is a national newspaper. People all around the country are starting to ask the same questions that we’ve been asking at the Bluegrass Institute for some time – what is really being spent by our school systems, and why can’t the public have a better view of that information?

Graduation Rates – Who Ya Gonna Trust?

Kentuckians and their policy makers have been inundated over the past few years with all sorts of figures about how many kids actually graduate in Kentucky.

Unfortunately, because Kentucky doesn’t have high quality graduation rate data – and won’t get that until 2015 or so under current plans – a bunch of different formulas are being used here to estimate the proportion of kids who graduate within reasonable amounts of time from our high schools.

Bluntly put, those formulas don’t produce the same numbers, as this graph, which comes from a new item at the freedomkentucky.com Wiki site shows. 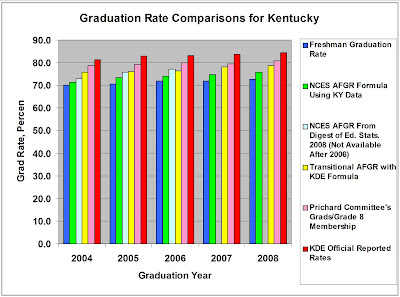 Sadly, the most inflated rates of all come from the formula officially being used by the Kentucky Department of Education. The department has announced changes to that formula, but I think they need to make them faster than currently programmed. With the confusion from all the rates shown above, a little more rational approach to calculating graduation rates won’t come a moment too soon.