What those new Averaged Freshman Graduation Rates Look Like

There are actually data available to calculate the AFGR for Kentucky for 2008 and several previous years, and I have done that as shown in this graph. 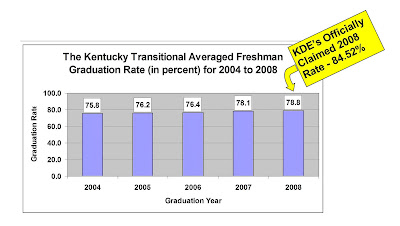 Note that the 2008 AFGR rate is nearly six points lower than the official 2008 rate from the Kentucky Department of Education of 84.52 percent. That amounts to about 3,000 students that the department officially says graduated when they really didn’t.

The good news here is that we have made a little progress, but we still are losing too many kids each year, and we are losing a lot more of them than the department wants to officially admit.

The data to compute these more accurate graduation rates are available now, and I don’t see any reason why we cannot start to use this more accurate formula for official reporting next year.

If I am missing something, please let me know. Also, for more on the AFGR calculations, see our new Wiki item, “Averaged Freshman Graduation Rates.”

The Kentucky Department of Education just released the public school Nonacademic Report for 1993 to 2008, and there is a surprise in Appendix B where it talks about planned improvements in the way the state reports graduation rates.

At present, as discussed in Appendix B, the department uses a formula called the “NCES Leaver Graduation Rate.” This rate is regarded as notoriously inflated among researchers who have looked at the reporting of high school graduation rates. States like Kentucky that use it are considered to be publishing misleadingly high graduation rate figures.

There is a far better way to compute graduation rates, one that former Kentucky governor Fletcher actually committed us to in 2005, but this method requires a highly accurate student tracking system. Because of missteps and extensive start up delays in the Kentucky Department of Education’s student tracking system, Kentucky won’t get its first really accurate graduation rate data until the 2013-14 school year even though such systems are already up and running in other states.

There was concern that Kentucky might continue to use the inflated NCES Leaver Rate until the final, high accuracy system became fully operational. However, the new Nonacademic Data Report says the state will now transition to a more accurate estimation formula for the Class of 2009-10 and later classes pending receipt of the first high accuracy data from our student tracking system.

Improving our graduation rate reporting is something the Bluegrass Institute has been pushing for years, and while the transition to the intermediate formula could be speeded up (and even start next year), the fact that there will at least be some intervening attempt to improve data on Kentucky’s high school performance is good news.

Congressional Democrats have been talking about a federal guarantee for state and local government bonded debt for a while now. 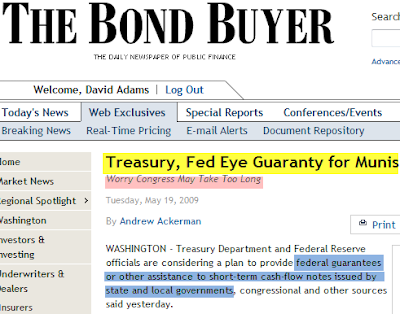 Given that borrowing in the municipal market is Kentucky’s preferred method of overspending, our politicians will surely be on board with this fiscally irresponsible plan to federalize state and local obligations. And, of course, California’s big spenders will breathe easier. But this is the worst idea — so far — in a growing string of bad ideas for Americans.

Gov. Steve Beshear is never going to get his act straight on Kentucky’s Davis-Bacon requirements if he gets his news from The Louisville Courier Journal. 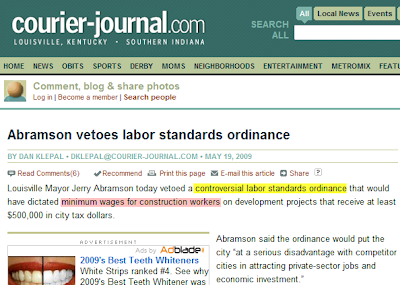 Louisville Mayor Jerry Abramson deserves credit for his veto of an ordinance requiring union wages for certain city construction projects. A similar move on the state level would save us all hundreds of millions of dollars. There’s no telling how silly the paper’s upcoming editorials on this matter will be, given reporter Dan Klepal’s false reference to the issue as one relating to “minimum wages.”

Any union thug could tell Mr. Klepal there is a huge difference between their earnings and minimum wage. Aren’t newspapers supposed to have editors and fact-checkers?

Caviar on a budget for tuna

Speaking on WHAS 840 AM in Louisville this morning, Gov. Steve Beshear dismissed a question about repealing prevailing wage requirements.

Overspending on taxpayer-paid wages based on political connections simply can’t be justified in the middle of an overspending crisis.

As we await official revenue forecasts due out next week, now is exactly the right time for officials to get realistic about spending priorities.