A relatively new report from the Institute of Education Sciences at the National Center for Education Statistics (NCES) shows a dramatic 77 percent rise in the number of students who are being home schooled in the nation. In 1999 the report shows 850,000 students were being primarily or completely schooled at home. By 2007, the number had significantly increased to 1,508,000.

The figure below shows the percentage of school age kids made up of home schooled students for the three survey years of the study. 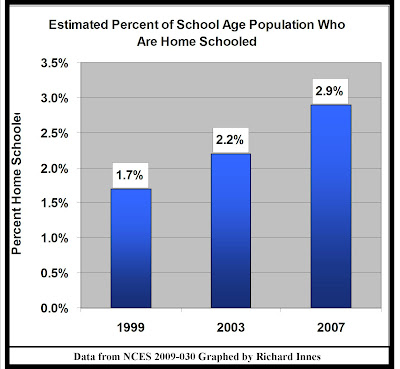 NCES says the prime reasons for choosing home schooling include,

• Concern about the school environment,

• To provide religious or moral instruction, and

• Dissatisfaction with the academic instruction available at other schools.

Furthermore, the Post reports that charters have closed the pervasive gap with “upstate” school systems and for the many minorities in New York City.

Meanwhile, Kentucky doesn’t even allow charters. What a shame for our kids!

Future High School Dropouts Can Be Spotted By the Fourth Grade

It’s not news to us, but the popular press is running an Associated Press (AP) article about the fact that high school dropouts can often be spotted by the fourth grade as though this is a stunning new revelation (this article also ran in many other news sources such as Education Week [subscription]).

This will be a revelation to others here. We heard a lot from the KERA Amen Chorus in the recent past about how we have to focus on our high schools in order to improve graduation rates.

In contrast, the Chorus told us that things were much better in the lower level schools.

However, after looking at other research, the Bluegrass Institute has always felt the dropout problem starts in elementary schools. Our now defunct CATS assessments simply were not telling us the truth about what was happening even though they apparently did fool the KERA Amen Chorus.

Now, the AP and a bunch of newspapers around the country apparently get it, too. So, yet another education fad belief – that the dropout problems were mostly in our high schools – now is headed for the trash bin.

A new report from the American Enterprise Institute (AEI) is bound to raise eyebrows in Kentucky, especially once people see the ranking of college graduation rates I assembled below from the data in that report.

Of course, this ranking shouldn’t be a huge surprise. After all, Kentucky’s college freshmen require remedial courses at an astonishingly high rate.

Among Kentucky schools, the worst graduation rate was for Spalding University, where only 24 percent graduated from the entering class of 2001. However, other schools had single-digit rates, so this was not the worst performance in the country.

At the other end of the Kentucky spectrum, Transylvania and Center College tied for the best rate of 73 percent. The top rate in the country was 100 percent at the Arkansas Baptist College while a number of other schools posted rates above 90 percent.

One of the really big disappointments in the new report is the University of Louisville’s very poor ranking among comparably competitive schools in the South. U of L ranked third from the bottom of all “Very Competitive” colleges in the “South” region with a rather dismal 44 percent graduation rate.

The report even singles out U of L as an example of a place where something is amiss, comparing this school to James Madison University in Virginia. Both schools have virtually identical enrollments, tuition rates, and recruitment competitiveness, but James Madison graduates 81 percent of its students.

In fact, the average graduation rate across the country for similarly competitive schools is 62.3 percent.

Someone really needs to look into what’s wrong with U of L.

Washington D.C.-based Center on Budget and Policy Priorities spends almost six minutes on this podcast to tell you states need to tax you more for your own good.

You can listen to the whole thing if you want, but 5:05 to 5:15 pretty much gives you what they have in mind.

It’s good stuff if you need to be able to say that a nonpartisan think tank says states need more money, but it doesn’t do much for the rest of us who watch our pennies and can’t understand why government won’t do the same.

Harvard professor Caroline Hoxby is one of the more knowledgeable researchers on charter schools in the country. If you want to see an excerpt of what she has to say about these public schools (no, charters are not private schools!) to better understand why the US Secretary of Education is pushing them, click on this You Tube.