Gov. Steve Beshear has said a lot about his desire to expand dependency on government by signing more Kentucky children up on government-provided health insurance.

Legislators in Arizona have a better idea, which involves allowing insurance policies to be sold without unneeded state mandates, like alcohol abuse treatment.

Kentucky could also attract more insurance competition into the state by allowing insurers to exclude certain pre-existing conditions for up to twelve months, rather than the current six.

Fifth best at what?

Gov. Steve Beshear’s Chief of Staff is all atwitter with the news that Site Selection Magazine has named Kentucky’s corporate welfare scheming as the fifth most prolific in the nation for 2008.

“Kentucky has been very aggressive in its economic development strategy under the leadership of Gov. Beshear, and this ranking demonstrates our work is seeing results,” said Chief of Staff Larry Hayes, who doubles as Kentucky’s Economic Development Cabinet Interim Secretary.

The press release sent out by the Cabinet for Economic Development accurately describes the “award” in its second paragraph as a measure of “state economic development agencies’ competitiveness.” That’s a lot different than the headline that proclaims Kentucky’s “economic competitiveness” as the fifth best in the nation. 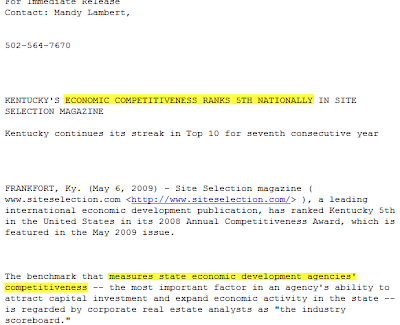 In other words, this “award” suggests Kentucky has to dole out more tax incentives to companies to get them to invest here than nearly every other state does. We had to debunk a similarly misleading ranking only two months ago.

Sure would like to think Kentucky’s reporters will catch (and disseminate) the distinction. Continued cheerleading on this point would be highly inappropriate.

The state of Kansas has been posting public expenditures on the internet for over a year, so it seemed reasonable to expect their legislature to expand that same openness to their public schools.

The floor amendment that failed in the Kansas Senate consisted of the following language:

“From and after July 1, 2010, each school district shall maintain a secure internet-based check register to record the receipts and expenditures of the district. The check register shall be freely available and accessible to the general public.”

The Center for Fiscal Accountability has more.

In terms of transparency, Kentucky still can’t get to first base, much less peek into the vault of our secretive school bureaucracy. But it is good to see others making the effort and paving the way for the time when Frankfort allows itself to be dragged into the 21st century and out of the dark shadows of secrecy with the public’s money.

Another nearby state looks at tax reform

The John Locke Foundation weighs in:

“As I have previously argued, tax reform can only succeed when it is a net tax cut, not a tax increase. Lawmakers need tax relief both to mobilize the general public to favor the plan and to placate the objections of previously favored groups losing their special tax breaks. Otherwise, they’ll end up compromising in ways that make the “reforms” even less reforming than originally planned, while increasing complexity.”

“Lawmakers also need to drop some of their more unrealistic goals. For example, both state and local policymakers have for decades schemed to force out-of-town business owners and tourists to pay for government services for North Carolinians. That’s silly. Few economists will tell you that it is wise to tax your exports, which is what such tax schemes consist of. Those who work, invest, and live in North Carolina should bear a tax burden roughly in proportion to the value they derive (at least in theory) from the provision of government services.”

As more states look at improving their tax systems, we hope Kentucky policymakers will consider wisely the various options rather than knee-jerking their way to a bigger bite of taxpayer money.

Prichard Provides Interesting Insight on Whether Kids Held Back Ever Graduate

I’m still locked out of the Prichard Committee’s Blog, so I can’t compliment Susan Weston on her interesting calculation of the percentage of students who are held back in ninth grade and then go on to finally get a regular diploma.

Susan estimates that only about 17 percent of the kids who are retained (held back) in ninth grade eventually go on to get a diploma. It’s a pretty grim statistic.

It’s also worth your time to read the comment to Susan’s blog from Cindy Baumert. Ms. Baumert interprets Susan’s statistic as indicating that those who say we shouldn’t be upset if kids take five years to graduate are wrong. Instead, it’s time to figure out what is really going on because we are not getting the job done.

To all of that, I heartily agree. We have dragged our heels far too long thanks in part to inflated graduation rates and unrealistically low dropout rates that lulled too many into a sense of complacency. Our jails are now full of the consequences of our failure to get a grip on why kids fail in school.